Visa regulations to be lifted with Russia in two months 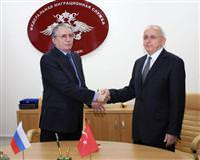 With the signing of a mutual agreement between Turkey and Russia, today mutual visa regulations will most likely be lifted within two months time. The decision is expected to increase trade between the two nations and has excited tourism operators as it will go into effect prior to the start of the summer season.

After the initial protocol to lift joint visa regulations was signed on May 12th, today, the Re Admission Agreement, considered the final stage in the process, was signed between Turkey and Russia. According to the Russian Embassy, visa regulations should be lifted between the two countries in one to two months' time. Now, not only will businessmen be able to travel freely without the burden of obtaining visas, but the practice is also expected to positively affect tourism between the two nations. Last year alone, three million Russian tourists vacationed in Turkey. In return, almost 100,000 Turks received visa to travel to Russia.
Last Update: Jan 18, 2011 5:10 pm
RELATED TOPICS