Bulgaria also in preparation to fence border with Turkey 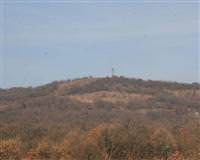 It turns out Bulgaria, Turkey’s other neighbor, is also planning to set up fencing to divide the border. However this time, unlike Greece, the reason behind the decision is ‘to prevent the spreading of foot and mouth disease’.

After the recent news of Greece's plans to set up a barrier along the border with Turkey, supposedly Bulgaria also has plans to set up a fence, however this time it is to prevent foot and mouth disease.
Accordingly, should Bulgaria receive financial support from the European Commission, they plan to erect a 143-kilometer-long fence along the border with Turkey in order to prevent domesticated and wild animals from crossing over.
According to National Veterinarian Medical Service Director Yordan Voynov, who spoke to the Bulgarian daily Dnevnik newspaper, during the Cold War, there was a fence situated along the border, however now only 29-kilometers of the division remains.
Voynov states, "The barrier would be built with funds from the budget, which could later be compensated for by Brussels. If we don't erect a fence, then there is no way for us to prevent the crossing of livestock or wild animals." Voynov also noted that foot and mouth disease was detected in the Rezve village located in the Rezve Creek area which makes up a portion of the Turkish-Bulgarian border. Voynow also went on to state that 200 livestock belonging to nine farmers will have to be put down, and that includes 21 cows which have supposedly entered from Turkey.
MINISTER: NO REQUIREMENT
In response to a question of whether or not a security barrier will be erected between Turkey and Bulgaria, Bulgaria's Minister of Foreign Affairs Tzvetan Tzvetanov states, "There is no such requirement in order for us to join the Schengen zone." Tzvetanov also emphasized that Bulgarian Border Police use the latest technology fur surveillance, and in addition to x-ray and thermic scanners they also place utmost importance on all measures needed to physically check the border. Kırıkkale Director of Agriculture Hasan Çebi expresses that a wire fence would not be a solution, and states "Putting up a barrier is not a preventative measure, foot and mouth disease cannot be prevented with a wire fence." Çebi also announced that they have vaccinated 16,000 animals in villages located along the border.