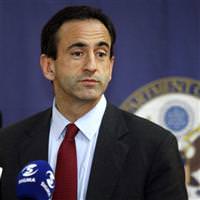 Rival sides in ethnically divided Cyprus have not made as much progress as hoped in peace talks but there is still hope for a deal, a senior U.S. diplomat said on Thursday.

Peace talks on the eastern Mediterranean island have been limping along since 2008. Leaders of the Greek and Turkish Cypriot communities will report to U.N. Secretary-General Ban Ki-moon in Geneva next week on progress to date.
"They are not yet on the verge of a settlement. We would rather see them more advanced than where they are," Philip Gordon, the U.S. assistant Secretary of State for European and Eurasian affairs, told a news conference in Cyprus.
A settlement on Cyprus is crucial for Turkey joining the EU, where the island is represented by Greek Cypriots.
Turkey supports a breakaway Turkish Cypriot state in northern Cyprus.
"Everyone loses from a perpetuation of the status quo," said the U.S. diplomat, who was visiting Cyprus. Gordon said both sides were committed to negotiations. "The process of direct talks between the two sides is the only way this problem is going to be solved, and from that we are encouraged." Peace talks are focused on re-linking the island as a federation, but progress is dogged by disputes over power-sharing, property rights of thousands of internally displaced people, and territorial handovers.
Recent disclosures that Cyprus could be sitting on considerable quantities of hydrocarbons could further complicate discussions. A U.S. firm licensed by Greek Cypriots has a permit to explore for oil and gas southeast of the island, close to where Israel recently made two massive offshore gas discoveries.
Turkey argues that any Greek Cypriot exploitation of hydrocarbons will hinder peace efforts. Gordon said the two issues were unrelated.
"If it benefits energy diversity in Europe and energy supplies in Cyprus that is a good thing ... I really don't see a linkage between those two issues."
Last Update: Jan 21, 2011 3:33 pm
RELATED TOPICS