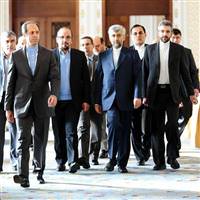 An apparent failure by world powers and Iran to make any progress towards resolving the dispute over its nuclear plans may increase U.S. talk of the need to step up sanctions pressure on the Islamic Republic.

Two days of seemingly fruitless discussions in Istanbul between Iran and the six powers -- the United States, France, Germany, China, Russia and Britain -- ended on Saturday without even an agreement on when and where to meet again.
European Union foreign policy chief Catherine Ashton said the door remained open but the outcome was clearly disappointing, even if no one had expected a breakthrough in the Turkish city.
Western officials had hoped for signs that Iran would be willing to start addressing their concerns about its nuclear programme, which they fear is aimed at making bombs but Tehran says is designed for peaceful power generation.
But the Iranian delegation made clear from the outset that the country's "nuclear rights" were not negotiable
Ashton, who led the big powers' delegation, said no new meeting was planned for now. An Iranian official said the talks would resume, but that no date or venue had yet been set.
In the previous session between the two sides in Geneva in early December, which also made no concrete headway in easing the standoff, there was at least an agreement to have another meeting in Istanbul at the end of January.
The Istanbul talks underlined the wide divide and how increasingly tough sanctions on Iran, a major oil producer, have so far had little effect in persuading the Islamic state to change course.

U.S. Secretary of State Hillary Clinton raised the possibility earlier this week of further increasing such pressure, telling U.S. network ABC the Obama administration may propose new unilateral measures against Iran.
But some analysts say it is unlikely that the U.S.-led drive to isolate Iran and its hardline leaders, who use the nuclear programme to rally nationalist support at home, will make the country back down over its atomic activities soon.
Any U.S. push to again tighten such pressure on Iran may also anger Russia, which voted for a fourth round of U.N. sanctions last June, but which criticised subsequent unilateral steps by the United States and the European Union.
Western officials and experts say the sanctions are hurting the Iranian economy, even though a higher oil price may blunt the impact.
Bruno Tertrais, an Iran expert at the Paris-based Foundation for Strategic Research, said the most efficient sanctions had been those implemented by Washington and the 27-nation EU, which include measures targeting Iran's vital oil and gas sectors.
The powers should consider declaring that the diplomatic process would be over unless there is an agreement within three months, he said.
"If the process were officially terminated, Western countries would increase their pressure on Iran by imposing additional unilateral sanctions," Tertrais wrote in a blog on Friday, while the Istanbul meeting was still in process.