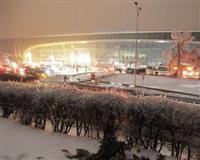 At least 31 people were killed and more than 100 injured on Monday in a suicide bombing at Russia's biggest airport, Russian news agencies reported.

Smoke wafted out of the baggage claim area and people were seen running out of the emergency exits at the airport, local media reported.

Initial casualty figures were contradictory with ITAR-TASS saying about 20 people had been killed. A spokeswoman for prosecutors put the number of casualties at about 20.

The Kremlin is struggling to contain an Islamist insurgency in the mainly Muslim North Caucasus, and rebels have repeatedly vowed they will take their battle to the Russian heartland.