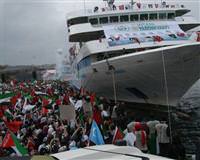 President Gül offered up harsh criticism of Tel Aviv's report of the raid on the Mavi Marmara, “This document, which by our account has absolutely no value, displays Israel’s indifference to the world and their spoiled and unconcerned attitude. UN decisions are what matters to us.”

President Abdullah Gül stated that the report prepared by Israel on the Mavi Marmara attack, which resulted in the deaths of nine Turkish nationals had no credibility in terms of international law and contained no plausibility or legitimacy.
USA CALLS REPORT CREDIBLE
Meanwhile, US State Department spokesman Philip J. Crowley's response to the Israeli report was, "We think that this is an independent report, credible and impartial and transparent investigation that has been undertaken by Israel.

Turkey released their own report of the incident to the press, just a day after Israel's report was released by Israeli Supreme Court Judge Jacob Turkel, claiming Israel acted in self-defense and within their rights in international law. According to Turkey's report on the Mavi Marmara raid, Israeli soldiers used excessive, indiscriminate and disproportionate force by strip searching passengers, denigrating females and killing passengers before they even landed on deck.
Turkey's report, prepared by Turkey's National Inquiry and Investigation Commission, was sent to the UN in September. The report also lists Turkey's demands for Israel to pay reparations and to issue an apology for the incident.