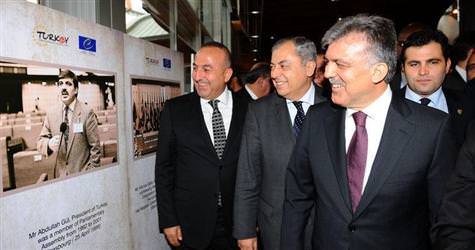 During an address to European parliamentarians, President Gül reiterated his call for a joint commission to handle Armenian allegations. Explaining that Turks were also killed in the events that transpired, Gül stated, “Let’s all together look towards the future.”

Addressing the European Council at the plenary session of the Parliamentary Assembly of the Council of Europe (PACE), for the first time in three years after serving as member for ten, President Abdullah Gül let his experience talk as he answered questions posed by European deputies. Seated on a blue chair in front of the PACE General Assembly, a number of parliamentarians from PACE's wide political spectrum posed questions for President Gül ranging from such issues as Armenian allegations regarding the incidents that transpired in 1915, Turkish-Israeli relations, freedom of speech and the constitution.
Although Gül delivered his address in English, he chose to answer question in Turkish and at times had to temper assaultive statements made by certain parliamentarians. The following are a series of answers President Gül provided for PACE deputies:
ELECTION THRESHOLD TO BE LIFTED AFTER THE ELECTIONS: The lifting of the electoral threshold will be done after the general elections. It also appears possible that the constitution may be changed in its entirety following the elections. For the upcoming elections however, the election threshold will remain valid. However, it is not foreseen that independent candidates will be subjected to the election threshold.
MINORITY RIGHTS ARE UNDER GUARANTEE: Minority rights were taken under guarantee with the sigining of the Treaty of Lausanne. Sometimes issues pertaining to assets and property can arise. When the rulings made according to Turkish law are not satisfactory, then an application can be made to the ECHR. The issue is completely derived from technicalities.
ISRAEL IS CAUSE OF TENSION: Turkey is working towards facilitating stability in the region; and not to gain prestige. In the past, Israelites would impose on Turkey to help them. However, the Israeli military raided an aid convoy headed to Gaza. Turkey is not the instigator, Israel is. If Israel has lost confidence in Turkey's duty as mediator, then that is Israel's decision.
LET'S FORM A COMMISSION: (Upon the question, "When will Turkey show the courage to acknowledge an Armenian 'genocide'.) We do not accept that a genocide transpired in our history. If there are those who do accept this claim, then come, let's form a joint commission and open up the civilian-military archives. One country's parliament chooses to recognize a 'genocide'. If we were to ask them just three questions on the issue, none of them would be able to answer. When in fact, during those battles, as millions of Turks were returning to Turkey from the Balkans, approximately three million Turks died. Now, in order to not infuse the pain of this suffering onto the new generations and to not arouse animosity towards our neighbors, for many years we have not explained what happened, we have always just looked ahead. If we live in accordance to history, then no one could look face to face at each other in Europe. What we need to do is this; altogether we must look towards the future.

CHRONIC PROBLEM: ("Why was the occupation of Nagorno-Karabakh by Armenia tied to the protocol signed between Turkey and Armenia?) Your question implies that the occupation is legitimate or unimportant. I do not connect one issue to the other. However, we need to look at the big picture. We very much want to normalize relations with Armenia. However, chronic problems are not instantly solved.

NO DISCRIMINATION BETWEEN MOSQUE AND CHURCH: (In response to the question, "Will you permanently open up the Sümela Monastery to masses? Will you open the Heybeliada Seminary?) We have to respect people's religion and denominations. These types of obstacles are being lifted in Turkey. Even those who are not religious at all must be able to live freely. We paid much heed to restoring the Armenian Church in Van. Because Turkey is such a large country, there are a number of mosques that have not been restored. On this issue, we do not discriminate between mosques or churches, whichever needs to be restored will be.

REPROACH OF EUROPE: Europe does not solely consist of economy; it also acts as a guide in terms of democracy, human rights, value and humanity. However, Europe is not aware of their soft power. Europe right now, from a global perspective, is a deficient player. The level of racism and xenophobia in Europe has reached very worrisome levels. Europe needs to develop a unified European conscience."

While in Strasbourg, President Gül also paid a visit to an exhibition celebrating Turkey's taking over of the Term Chairmanship of the Committee of Ministers, which include photographs of himself in his youth. President Gül said to those around him, "Look how much my hair has changed. It used to be jet black."