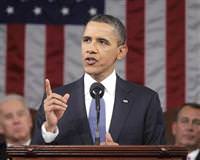 U.S. President Barack Obama moved swiftly toward the political center on Tuesday with a State of the Union address that reached out to both parties and lacked major policy proposals.

Wearing a blue tie and an American flag pin, Obama sought to build on the oratorical success of his widely praised speech in Arizona to commemorate the victims of the shooting there.

His State of the Union speech was not as stirring. He drew plenty of applause but only a handful of standing ovations. The celebratory mood of previous congressional addresses was gone.
Obama needed to be conciliatory. Republicans now control the House of Representatives and have greater sway in the Senate. He needs them to help advance his policy priorities.
Will the State of the Union address help him with that? Perhaps. Here is a look at what he achieved and did not achieve on Tuesday: * Moving to the center. After previous State of the Union addresses included long lists of Democratic-themed policy goals, this year Obama was more modest and more centrist with his legislative aspirations.
Rather than pushing for an emissions trading system to fight climate change -- a failed goal from his presidential campaign -- Obama proposed having 80 percent of the country's electricity production come from "clean" sources by 2035.
Rather than defending his success in passing healthcare reform, he offered to work with Republicans to improve it.
More pointedly, he focused on issues that the opposition party likes to embrace like cutting corporate taxes and passing trade pacts, emphasizing the more business-friendly tone that his White House has tried to espouse since the Democratic Party's drubbing in 2010.
* Setting the tone. Obama began his speech with a bipartisan note, referring to wounded Congresswoman Gabrielle Giffords, and lawmakers from the Democratic and Republican parties chose to sit together to show a spirit of unity.
Obama tried to use that atmosphere to his advantage. He called repeatedly on both parties to work together on issues from advancing free trade to reforming the tax code.
But the coziness only went so far...
Republicans did not stand up with Democrats while applauding the president's proposals on education and immigration, for example, and Obama pressed for an end to tax relief for the wealthiest Americans -- despite having agreed to a two-year extension of Bush era tax cuts last year.
* Gearing up for 2012. Obama said victory in the next election was not at stake right now, but his speech was structured to set him up for a reelection campaign.
The president touched on some of his major policy victories, such as ending the "Don't Ask, Don't Tell" policy that prevented gays and lesbians from serving openly in the military. That was a shout-out to his base.
Despite few signs that lawmakers are ready to tackle immigration reform, the president touched on that issue as well. When he hits the campaign trail next year, even if that proposal does not have legs, he will be able to tell the crucially important Hispanic voting bloc that he never gave up on their signature issue.