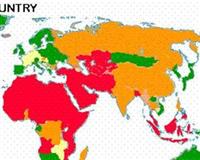 Falling birth rates will slow the world's Muslim population growth over the next two decades, reducing it on average from 2.2 percent a year in 1990-2010 to 1.5 percent a year from now until 2030, a new study says.

Muslims will number 2.2 billion by 2030 compared to 1.6 billion in 2010, making up 26.4 percent of the world population compared to 23.4 percent now, according to estimates by the Pew Forum on Religion and Public Life.

The report did not publish figures for worldwide populations of other major religions, but said the United States-based Pew Forum planned similar reports on growth prospects for worldwide Christianity, Hinduism, Buddhism, Sikhism and Judaism.

"The declining growth rate is due primarily to falling fertility rates in many Muslim-majority countries," it said, noting the birth rate is falling as more Muslim women are educated, living standards rise and rural people move to cities.

The report, entitled The Future of the Global Muslim Population, was part of a Pew Forum program analyzing religious change and its impact on societies around the world.

Pakistan will overtake Indonesia as the world's most numerous Muslim nation by 2030, it said, while the Muslim minority in mostly Hindu India will retain its global rank as the third largest Muslim population.

Continued migration will swell the ranks of Europe's Muslim minorities by one-third by 2030, to 8 percent of the region's inhabitants from 6 percent, it said.

The Muslim share of the U.S. population will grow from 0.8 percent in 2010 to 1.7 percent in 2030, "making Muslims roughly as numerous as Jews or Episcopalians are in the United States today," the study said.

"The slowdown in Muslim population growth is most pronounced in the Asia-Pacific region, the Middle East-North Africa and Europe, and less sharp in sub-Saharan Africa," it said, while migration will accelerate it in the Americas through 2020.

While Muslim populations worldwide are still younger on average than others, "the so-called "youth bulge" -- the high percentage of Muslims in their teens and 20s -- peaked around the year 2000 and is now declining," the study said.

Sunni Muslims will continue to make up the overwhelming majority in Islam -- about 87-90 percent, the report estimated -- while Shi'ite numbers may decline because of relatively low birth rates in Iran, where one-third of all Shi'ites live.

The study saw a close link between education and birth rates in Muslim-majority countries. Women in countries with the least education for girls had about five children while those where girls had the longest schooling averaged 2.3 children.

The study said it counted "all groups and individuals who self-identify as Muslims," including secular or non-observant people, without measuring levels of religiosity.

It said measuring the impact of Islam on birth rates was difficult because "cultural, social, economic, political, historical and other factors may play equal or greater roles."