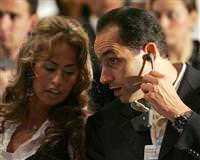 Egyptian officials denied on Thursday a report that President Hosni Mubarak's politician son had fled Egypt, which has been hit by three days of anti-government protests.

Many Egyptians believe Gamal Mubarak, 47, who holds a top post in the ruling National Democratic Party, is being groomed for when his 82-year-old father leaves office. Both deny this.

"He (Gamal) had a meeting at the party headquarters this morning to discuss issues related to the demonstrations, along with other party leaders," a senior party official told Reuters, adding that the meeting lasted into the late afternoon.

Internet sites have been filled with rumors that Gamal had left for London. A report was also carried by broadcaster CNBC.

Egyptian protesters have been inspired by Tunisians who took to the streets and toppled their president of 23 years, Zine al-Abidine Ben Ali, who fled to Saudi Arabia this month.