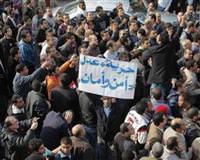 Egyptian demonstrators fought security forces into the early hours of Friday in the city of Suez, and the Internet was blocked ahead of the biggest protests yet planned against President Hosni Mubarak's 30-year rule.

Emboldened by this month's revolt that toppled the authoritarian leader of Tunisia, Egyptians have staged mass protests since Tuesday. The biggest demonstrations yet are planned for Friday afternoon after weekly prayers.

"This is a revolution," one 16-year-old protester said in Suez late on Thursday. "Every day we're coming back here."

Nobel Peace Prize winner Mohamed ElBaradei, who returned to Egypt from Vienna on Thursday, has called for Mubarak to resign and said he would join the protests on Friday.

Internet access was shut down across the country shortly after midnight. Mobile phone text messaging services also appeared to be partially disabled, working only sporadically.

U.S. State Department spokesman P.J. Crowley said in a "tweet" message on Twitter: "We are concerned that communications services, including the Internet, social media, and even this tweet are being blocked in Egypt."

A page on Facebook social networking site listed more than 30 mosques and churches where protesters were expected gather.

"Egypt's Muslims and Christians will go out to fight against corruption, unemployment and oppression and absence of freedom."

In Suez, which has been ground zero for some of the most violent demonstrations, police fired tear gas at protesters who hurled stones and petrol bombs into the early hours of Friday. Fires burned in the street, filling the air with smoke.

The city fire station was ablaze. Waves of protesters charged toward a police station deep into the night. Demonstrators dragged away their wounded comrades into alleys.

Security forces shot dead a protester in the north of the Sinai region on Thursday, bringing the death toll to five.

Video images obtained by Reuters showed the man among a small group of protesters some distance from the security forces when he suddenly collapsed with a gunshot wound and was dragged away by other demonstrators. The video circulated widely on the Internet, galvanizing anger.

Members of the Muslim Brotherhood, including at least eight senior officials of the opposition group and its main spokesmen, were rounded up overnight. A security source said authorities had ordered a crackdown on the group.