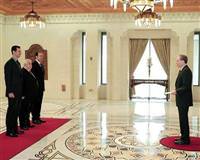 The United States resumed full diplomatic relations with Syria on Thursday just as tensions are growing again over neighboring Lebanon, where Damascus ally Hezbollah has gained the upper hand in a political crisis.

Assad wished Ford success in his mission, and the ambassador in turn said he hoped for improved U.S.-Syrian relations, which were downgraded in 2005 due to U.S. suspicions of Syrian involvement in the assassination -- which Damascus denies.

But the diplomatic niceties masked differences over Lebanon where businessman Najib Mikati is trying to form a new government with support from the Shi'ite movement Hezbollah.

This followed the crisis which pitted the armed group against U.S.- and Saudi-backed Sunni political leader Saad al-Hariri, son of the assassinated politician who was well connected in the West.

In a sign of tension over Lebanon, U.S. Senator John Kerry canceled a visit to Damascus that had been due this week, one diplomat said.

"Obama went out of his way to send Ford. He will be expecting something in return. Lebanon is an obvious area but the Syrians realize that the United States does not have much more to pressure them with," another diplomat said.

Washington imposed sanctions on Syria in 2004 for supporting Hezbollah and other militant groups, but the diplomat said it might not have many other tools for pressuring Damascus. "Syria is already under U.S. sanctions. I think the Americans are scratching their head about what to do," he said.

Washington has also sought to weaken the alliance between Damascus and Iran. It is still pushing to resume peace talks between Syria and Israel, diplomats said, pointing out that Frederick Hoff, a U.S. official versed in the so-called Syrian-Israeli track, visited Damascus this month.

Syrian political commentator Ayman Abdel Nour said Damascus was not averse to compromise if it felt the United States was lessening support for an international tribunal on the Hariri killing, which Syria views as a tool in the hands of its foes.

"The United States is keeping the tribunal card close to its chest. But Syria is stronger on the ground in Lebanon," Abdel Nour said. He dismissed the possibility of Washington resuming a policy of internationally isolating Syria because Damascus has built ties with countries such as its northern neighbor Turkey.

Ankara was not keen to see Saad al-Hariri fall from power, he said, but Turkey had enough interests with Syria to keep Damascus as an ally.

Hariri fell from power after a deal collapsed between Syria and Saudi Arabia to push for a compromise involving their allies over the tribunal, which Hezbollah expects to indict its own members. The group deny any role in the killing.