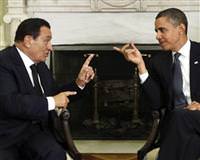 President Barack Obama called on Egyptian President Hosni Mubarak on Thursday to make "absolutely critical" reforms, ratcheting up pressure on a key U.S. ally in the face of street protests seeking his ouster.

Weighing in for the first time after three days of Egyptian unrest, Obama was careful to avoid any sign of abandoning Mubarak but made clear his sympathy for demonstrators he said were expressing "pent-up frustrations" over the lack of meaningful change.

Obama and his aides are performing a delicate balancing act as political upheaval rocks the Middle East, from Egypt to Tunisia to Lebanon to Yemen, catching his administration off-guard and showing the limits of U.S. influence.

While making a point of describing Mubarak as "very helpful on a range of tough issues," Obama sent him a blunt message to heed the demands of anti-government protesters for broader democratic rights after decades of authoritarian rule.

"I've always said to him that making sure that they are moving forward on reform -- political reform, economic reform -- is absolutely critical for the long-term well-being of Egypt," Obama said as he answered questions from an online audience on the YouTube website.

Even with its more assertive tone, the Obama administration seemed to be juggling its desire for regional stability, its support for democratic change and its determination to avoid the rise of an anti-U.S. Islamist government in Cairo potentially aligned with Iran.

"This isn't a choice between the government and the people of Egypt," White House spokesman Robert Gibbs told reporters. "This is not about taking sides."

The State Department expressed concern over reports that access to Internet and social networking websites was being blocked in Egypt.

"We are concerned that communication services, including the Internet, social media and even this #tweet, are being blocked in #Egypt," State Department spokesman P.J. Crowley tweeted late on Thursday.

Facebook and Twitter have been key means of communication for protesters in Egypt. Twitter said on Wednesday the government had been blocking its service for the second consecutive day and had "greatly diminished traffic."

Obama urged the government and protesters to show restraint, saying violence was not the answer. "It is very important that people have mechanisms in order to express legitimate grievances," he said, citing freedom of expression and access to social networking websites.

Secretary of State Hillary Clinton reinforced some of those points when she spoke to Egyptian Foreign Minister Ahmed Aboul Gheit on Thursday, the State Department said.

But in another sign that Washington was still treading cautiously, Vice President Joe Biden, asked about Mubarak's strong-handed rule in an interview with PBS, said: "I would not refer to him as a dictator."

Human rights advocates have accused successive U.S. administrations of being too soft on Egyptian rights abuses.

But the Obama administration is now pursuing a "dual-track" approach, with U.S. diplomats reaching out to government officials and democracy activists to encourage peaceful dialogue for reform, a senior U.S. official said.

Obama spoke out on a day that Egyptian police clashed with demonstrators and Nobel Peace Prize winner Mohamed ElBaradei arrived home. The death toll rose to five in protests inspired by unrest that toppled Tunisia's president earlier this month.

Despite that, Gibbs said Egypt's government was "stable."

Since taking office two years ago, Obama and his administration have struggled at times to balance support for moderate, authoritarian Arab states considered crucial to U.S. interests with a push for expanded political freedoms.

Egypt is an example of that dilemma. The United States sees it as a linchpin for future Israeli-Palestinian peacemaking and a bulwark against Iran's regional clout.

Mubarak has rarely heeded U.S. pressure before over his government's behavior, and the senior U.S. official said it was premature to talk about withholding aid to gain leverage.

Anti-American sentiment remains high on the Arab street despite Obama's outreach to the Muslim world and his efforts to ease hostility generated by his predecessor George W. Bush's decision to invade Iraq in 2003. The administration is also hemmed in by wanting to avoid the impression of further U.S. interference in the region.

Most U.S.-based analysts believe Mubarak is likely to weather the storm, if for no other reason than his government and military seem prepared to use whatever force is needed.

But if Mubarak does lose his 30-year grip on power, the greatest U.S. fear would be the rise of a government with strong Islamist ties and the risk of Egypt aligning itself with Iran, a bitter foe of the United States and its ally Israel.

This is widely seen as something the powerful Egyptian military would never permit. Washington has poured billions of dollars of military and other aid into Egypt since it became the first of only two Arab states to make peace with Israel.