Egypt wakes to devastation as Mubarak refuses to quit 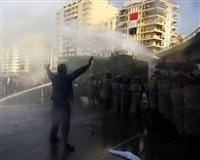 President Hosni Mubarak clung to power in Egypt on Saturday after days of popular protests against his 30-year-old rule in which at least 24 people were killed and more than 1,000 wounded.

Mubarak refused to bow to protesters' demands that he quit and ordered troops and tanks into cities overnight in an attempt to quell demonstrations that left a trail wreckage across Cairo.

The ruling party's headquarters were still burning on Saturday morning and demonstrators were still out in the streets in the early hours in defiance of a curfew. Daybreak revealed ransacked shops and burned-out buildings.

Mubarak promised to appoint a new cabinet on Saturday and called for dialogue to avert chaos.

Medical sources said at least 24 people had been killed and more than 1,000 wounded in Friday's clashes in Cairo, Suez and Alexandria.

"It is not by setting fire and by attacking private and public property that we achieve the aspirations of Egypt and its sons, but they will be achieved through dialogue, awareness and effort," the president said in a midnight TV address, his first public appearance since the protests began four days ago.

The unprecedented unrest has sent shock waves through the Middle East, where other autocratic rulers may face similar challenges, and unsettled global financial markets on Friday.

President Barack Obama said he spoke to Mubarak and urged "concrete steps that advance the rights of the Egyptian people."

The protests bore many hallmarks of the unrest that toppled the leader of Tunisia two weeks ago, although the arrival of army troops to back up the police showed that Mubarak still has support of the military, the country's most powerful force.

Protesters mocked his decision to sack his cabinet as an empty gesture.

"It was never about the government, by God. It is you (Mubarak) who has to go! What you have done to the people is enough!" said one.

"The people want the president to fall," dozens of youths chanted to a Reuters TV camera in the early morning in Tahrir square in central Cairo.

Tanks stood on roads leading into the square. One army armored personnel carrier was gutted by fire. The square was strewn with rubble, burned tires and charred wood that had been used as barricades overnight.

The army's arrival had initially been welcomed by crowds, frustrated by heavy handed police. But the damage to army vehicles showed that this swiftly wore off and protesters overnight accused the army of taking the same police line.

"What happened was a betrayal of the people...We were celebrating the army's presence when they got to Tahrir, we let them through to take over from the dirty riot police and then we got fired at again," Marzouq, a protester, in his 20s, said.

Cars began returning to the streets and there were other signs of normal life resuming but the wreckage was widespread.

In central Cairo, a petrol station was smashed and the burned-out shells of three cars lay on the street nearby. Elsewhere, police trucks and pick-ups still smoldered in the acrid air, filled with the smell of smoke and teargas.

The ruling party headquarters in Cairo, set ablaze on Friday, was still burning.

In Cairo's Mohandiseen district, jewelry shops were ransacked and emptied. A Reuters team saw a gang of looters storm into a bank and carry out the safe overnight.

More than half of the dead in Friday's clashes were reported in Suez, the eastern city which was a focus of the most violent protests over the past four days.

Some Egyptians expressed fear that more unrest would leave their country in ruins, and hoped Mubarak would go quickly.

"We don't want this regime to leave this country in a state of destruction. We want it to go away. We need to give them a safe haven to leave this nation. Leave us, enough," Salah Abdel Maqsoud, a senior official in the Journalists Union close to the opposition Muslim Brotherhood, told Al Jazeera television.

Mubarak, 82, has been a close ally of Washington and beneficiary of U.S. aid for decades, justifying his autocratic rule in part by citing a danger of Islamist militancy.

The Muslim Brotherhood opposition, however, appears to have played a backseat role in the unrest.

His government has largely shut Egypt off from the Internet, which protesters used to organize. The mobile phone network in Cairo was still out of action. Obama called for an end to interference with communications networks.

"I want to be very clear in calling upon the Egyptian authorities to refrain from any violence against peaceful protesters," Obama said.

Anthony Skinner, Associate Director of political risk consultancy Maplecroft, said Mubarak's conduct was reminiscent of that of Tunisia's ousted leader Zine al-Abedine Ben Ali, who also fired his cabinet hours before he was forced to flee.

"Mubarak is showing he is still there for now and he is trying to deflect some of the force of the process away from himself by sacking the cabinet. We will have to see how people react but I don't think it will be enough at all."