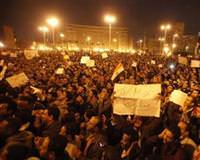 Egyptian protesters were camped out in central Cairo on Monday and vowed to stay until they had toppled President Hosni Mubarak, whose fate appeared to hang on the military as pressure mounted from the street and abroad.

"The army has to choose between Egypt and Mubarak," read one banner in Cairo's Tahrir Square, where demonstrators shared food with soldiers sent to restore order after violent protests shook Mubarak's 30-year rule to its core.

By dawn, some hardy demonstrators were still camped in the Square, which was covered in early morning mist. They had already begun chants of "Down, Down, Mubarak."

Six days of unrest has killed more than 100 people but the two sides have reached a stalemate. Protesters refuse to go, while the army is not moving them. The longer protesters stay unchallenged, the more untenable Mubarak's position seems.

Protesters in Tahrir Square -- epicenter of the earthquake that has sent shudders through the Middle East and among global investors -- have dismissed Mubarak's appointment of military men as his vice president and prime minister.

His promises of economic reform to address public anger at rising prices, unemployment and the huge gap between rich and poor have failed to halt their broader calls for a political sweep out of Mubarak and his associates.

Protesters have called for a general strike on Monday and what they bill as a "protest of the millions" march on Tuesday, to press their demands for democracy which could spell the end for the military establishment which has run post-colonial Egypt since the 1950s.

The United States, an ally which has poured billions of dollars of aid into Egypt since Mubarak came to power, stopped just short of saying openly that it wanted him out. Officials including President Barack Obama and Secretary of State Hillary Clinton spoke about "an orderly transition."

A senior U.S. administration official, who declined to be identified, said the feeling among Obama's national security aides was that Mubarak's time had passed, but it was up to Egyptians to determine what happens next.

Mubarak, a former air force chief, has turned to his military commanders, meeting them on Sunday. They seem to hold his future in their hands. Egypt's defense minister spoke by phone to U.S. Defense Secretary Robert Gates on Sunday.

Admiral Mike Mullen, Chairman of the Joint Chiefs of Staff and highest-ranking U.S. military officer, praised the "professionalism" of Egypt's armed forces as its troops refrained from a crackdown on protesters. Egypt receives about $1.3 billion a year in U.S. military aid.

The crisis in Egypt follows a revolt that toppled the leader of Tunisia two weeks ago, and a wave of popular anger sweeping other countries in North Africa and the Middle East.

Financial markets around the globe opened on Monday bracing for the impact of the weekend's events in Egypt. Brent oil hit a 28-month high, just pennies below $100 a barrel.

"The greater fear is that the turmoil could spread to other Middle East countries, including even Saudi Arabia. If that happens, then all bets for oil prices are off," ANZ Bank economist Sharon Zollner said in a note to clients.

Egypt's own financial markets will be closed for a second working day in a row on Monday and the turmoil could quickly run down its substantial reserves if it continues.

An Egyptian opposition coalition that includes the mass Islamist movement the Muslim Brotherhood has turned to Mohamed ElBaradei, former head of the U.N. nuclear watchdog, to form a national unity government and make contact with the military.

ElBaradei has urged Obama to call time on Mubarak.

"It is better for President Obama not to appear that he is the last one to say to President Mubarak, 'It's time for you to go," he told CNN.

ElBaradei disappointed the opposition by spending much of his time abroad since he first launched a campaign calling for political reform in Egypt last year, but lends the weight of his international reputation to a movement that lacks a leader.

"I think he is a good guy. He wasn't prepared for what happened. All we care about is that we don't get another pharaoh," said Rami Nabil, 39, a businessman camped in Tahrir.

"We need a system of government that is democratic and long term, not more pharaohs."

A short distance from the protests, shooting echoed over Cairo. Impromptu neighborhood watch groups set up checkpoints across the city center, checking anyone passing by.

Some of the self-appointed guards said shooting in one area near Cairo's supreme court was the result of looters in a chemical company building.

Security, which disintegrated on Saturday and Sunday when police withdrew from the streets, has been slowly restored. Extra troops sent into cities helped calm panicked residents and the official news agency said police patrols had resumed.

While the army has sought to stop lawlessness, there is no sign it is willing to drive the protesters off the street.

"In the next few days security and stability will return," said Brigadier Atef Said in Suez, east of Cairo and the scene of some of the worst of the violence between police and protesters.

"We will allow protests in the coming days. Everyone has the right to voice their opinion. We're listening and trying to help and satisfy all parties. We're not here to stop anyone. These are our people," he said.