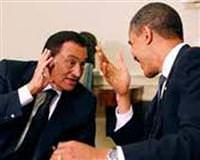 If Egypt's President Hosni Mubarak is toppled, Israel will lose one of its very few friends in a hostile neighborhood and President Barack Obama will bear a large share of the blame, Israeli pundits said on Monday.

Political commentators expressed shock at how the United States as well as its major European allies appeared to be ready to dump a staunch strategic ally of three decades, simply to conform to the current ideology of political correctness.

Prime Minister Benjamin Netanyahu has told ministers of the Jewish state to make no comment on the political cliffhanger in Cairo, to avoid inflaming an already explosive situation. But Israel's President Shimon Peres is not a minister.

"We always have had and still have great respect for President Mubarak," he said on Monday. He then switched to the past tense. "I don't say everything that he did was right, but he did one thing which all of us are thankful to him for: he kept the peace in the Middle East."

One comment by Aviad Pohoryles in the daily Maariv was entitled "A Bullet in the Back from Uncle Sam." It accused Obama and his Secretary of State Hillary Clinton of pursuing a naive, smug, and insular diplomacy heedless of the risks.

Who is advising them, he asked, "to fuel the mob raging in the streets of Egypt and to demand the head of the person who five minutes ago was the bold ally of the president ... an almost lone voice of sanity in a Middle East?"

"The politically correct diplomacy of American presidents throughout the generations ... is painfully naive."

Obama on Sunday called for an "orderly transition" to democracy in Egypt, stopping short of calling on Mubarak to step down, but signaling that his days may be numbered.

"AMERICA HAS LOST IT"

Netanyahu instructed Israeli ambassadors in a dozen key capitals over the weekend to impress on host governments that Egypt's stability is paramount, official sources said.

"Jordan and Saudi Arabia see the reactions in the West, how everyone is abandoning Mubarak, and this will have very serious implications," Haaretz daily quoted one official as saying.

Egypt, Israel's most powerful neighbor, was the first Arab country to make peace with the Jewish state, in 1979. Egyptian President Anwar Sadat, who signed the treaty, was assassinated two years later by an Egyptian fanatic.

It took another 13 years before King Hussein of Jordan broke Arab ranks to made a second peace with the Israelis. That treaty was signed by Israeli Prime Minister Yitzhak Rabin, who was assassinated one year later, in 1995, by an Israeli fanatic.

There have been no peace treaties since. Lebanon and Syria are still technically at war with Israel. Conservative Gulf Arab regimes have failed to advance their peace ideas. A hostile Iran has greatly increased its influence in the Middle East conflict.

"The question is, do we think Obama is reliable or not," said an Israeli official, who declined to be named.

"Right now it doesn't look so. That is a question resonating across the region not just in Israel."

To win popular Arab opinion, Obama was risking America's status as a superpower and reliable ally.

"Throughout Asia, Africa and South America, leaders are now looking at what is going on between Washington and Cairo. Everyone grasps the message: "America's word is worthless ... America has lost it."