Can the Arab revolt learn from Turkish model? 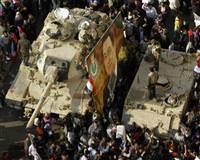 If President Hosni Mubarak bows to the clamor of the street and goes, Egyptians and other Arabs seeking to turn a page on autocratic government may look at Turkey for some clues on marrying Islam and democracy.

Relatively stable, with a vibrant economy and ruled by a conservative and pragmatic government led by former Islamists, Turkey has often been cited as a model Muslim democracy and a linchpin of Western influence in the region.

With a wave of unrest spreading from Tunisia to Jordan to Yemen and as calls intensify for Mubarak to start a transition soon, Middle East analysts are turning their attention to Turkey, a rising diplomatic force in the region.

"The only effective, working model in the Middle East is the Turkish model. There is nothing else," said Fatwa Gerges, professor of Middle Eastern politics and international relations at the London School of Economics.

"Turkey's model serves as a foundation for similar societies so I think then in the wake of the protests Arabs will be taking a second look at the Turkish model that marries Islamic values and democracy as a universal form of government," Gerges said.

But analysts cautioned that deep differences between Turkey, a NATO partner and European Union candidate with a moderate brand of Islam, and an Arab Middle East lacking a culture of political freedom, means the model cannot be readily copied.

"There is no question Turkey's example can be an inspiration in Tunisia or in Egypt, but if any Arab country would take Turkey as a model it would take it decades to emulate Turkey's political and economic development," said Fadi Hakura, associate professor at London's Chatham House think tank.

THE ROLE OF THE MILITARY

With protesters demanding an end to Mubarak's 30-year-rule and clashes breaking out in Cairo streets between opponents and supporters of the government, Egypt's military may hold the key to Mubarak's fate and to Egypt's pro-democracy movement.

Wednesday, Egypt's armed forces told protesters their demands had been heard and they must clear the streets, but the army has so far not used force.

In Turkey, the powerful military has ousted four governments since 1960, and has acted as a final arbiter of power in a parliamentary system that has prevailed since the 1950s.

Paul Salem, director of the Carnegie Endowment's Middle East Center in Beirut, noted that this was not the case in Egypt, where the military has been at the heart of power since the overthrow of the monarchy in 1952.

"The military in Egypt has to make a basic decision which the Turkish military did successfully and with such a good outcome, which is to step back, focus on protecting the country's sovereignty, protect the constitution and allow civilian politics to grow," Salem said.

"This is exactly what the military has been asked to do in Egypt and in Tunisia and in Jordan, but we are not there yet."

Analysts say Islamist groups are likely to play a prominent role in Tunisia after the fall of former President Zine al-Abdine Ben Ali and in Egypt once Mubarak goes.

Such prospects are a concern for the United States, which has backed autocratic Arab rulers as bulwarks against the perceived threat of militant Islam.

Its victory in 2002 elections was seen as a triumph for a strain of political Islam centred on promoting Muslim values democratically rather than imposing strict Islamic law.

The Brotherhood says it would preserve democracy, but experts are divided on which way it may go.

Lorenzo Vidino, an expert on the Muslim Brotherhood at the RAND Corporation, said the Turkish experience was the best case scenario for an Islamist movement getting into government in Egypt, but said he did not see that happening.

"The Muslim Brotherhood has not undergone the evolution that took place in Turkey where in the 1990s Erdogan and (President Abdullah) Gul got rid of the old Turkish Islamist guard who were anti-democratic," Vidino said.

"That generational change has not taken place in the Muslim Brotherhood where there is a struggle between the old school and the second generation Islamist, so the jury is still out."

But Gerges said he saw the Brotherhood, aware the protests are part of a broad-based movement, "traveling a similar journey to that of the Turkish Islamists."

"This revolution was about rebuilding the failed institutions of Arab states and rebuilding democracy, so the Brotherhood are having a major discussion," Gerges said.

President Barack Obama called Erdogan Saturday evening to discuss the turmoil in Egypt and stressed the importance of his role as an elected leader in the region.

But Turkey is no predictable ally. Increasingly assertive, it has charted an independent course in recent years.

Turkey has fallen out of step with the United States and Western allies on some foreign policy issues, notably on Iran.

And Erdogan's vehement condemnations of Israel after an offensive in the Palestinian Gaza enclave in late 2008 heralded a breakdown in Turkey's friendship with the Jewish state but won admiration across the Middle East.