Relief as Australia mops up from giant cyclone 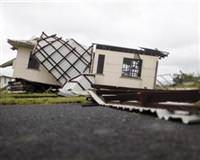 Australians voiced relief and surprise after one of the world's most powerful cyclones spared the nation's northeast coast from expected devastation on Thursday, with no reported deaths despite winds tearing off roofs and toppling trees.

Cyclone Yasi, roughly the size of Italy and with winds forecast to hit at up to 300 km per hour (186 mph), threatened Australia with its second major natural disaster in as many months but ended up missing heavily populated areas.

The storm destroyed about 15 percent of the nation's sugar cane crop, pushing world prices to the highest in three decades, and prompted the evacuation of Xstrata Plc's Mt Isa copper mine, which lay in its path.

"It's amazing no-one was killed. The wind was howling like a banshee," said farmer Nathan Fisher, speaking out the window of his four-wheel-drive vehicle as he returned to his property from a shelter in the small town of Innisfail.

But building engineers questioned whether Cyclone Yasi, rated at the top level category five, was as powerful as forecast and said large cyclones tend to be over estimated.

"If winds were at 300 km an hour it would have been a 100 percent wipe out," said James Cook University's George Walker, adding the damage suggested a category three cyclone.

"Even the newer buildings would by and large stay up but suffer some damage."

Australia, a vast continent with less than three people for every square kilometer, is one of the few countries where a storm as large and terrifying as Yasi -- with a diameter of up to about 500 km (310 miles) -- could simply miss major cities.

Even as Yasi began its 1,000 km (620 mile) march into the outback on Thursday, weakening as it went, tracking forecasts showed it was likely to hit only a handful of small towns in a region that is home to about 400,000 people.

The lack of any major damage or substantial casualties was also attributed to several days of preparation, early evacuations, laws that ensure newer homes and buildings are strong enough to survive a cyclone, and less than expected sea flooding as the cyclone missed peak tides.

The cyclone came ashore around midnight along hundreds of kilometers of coast in Queensland state and then drove inland, bringing heavy rain to mining areas struggling to recover from recent devastating floods.

"Early reports have given us all a great sense of relief," Queensland Premier Anna Bligh told reporters.

Yasi was rated a maximum-strength category five storm, and drew comparisons with Hurricane Katrina, which wrecked New Orleans in 2005, killing 1,500 people and causing $81 billion in damage.

It was downgraded to a category-one storm late on Thursday as it moved toward Mt Isa, but its core continued to fuel damaging gusts and heavy rain, the Bureau of Meteorology said.

The biggest impact would be on the economy. Sugarcane crops had been damaged, with initial estimates suggesting about 15 percent of the national crop could be lost. The industry estimated that one area, accounting for about a third of the crop, had suffered up to 50 percent losses.

Some coal mines remained shut after the cyclone passed. But others started to resume operations and the Hay Point coal port and Mackay grains port reopened late on Thursday. Coal rail lines were also set to reopen. Queensland accounts for 90 percent of Australia's steelmaking coal exports.

The eye of the cyclone crossed the coast near the tourist town of Mission Beach, where devastating Cyclone Larry struck in 2006, and damaged areas around Tully and Cardwell, where many older homes, built before tougher building codes were introduced, suffered severe damage.

Authorities said initial reports suggested only about 100 houses had suffered major damage. There were no reports of serious injuries.

Hills around Tully were covered in snapped trees and scoured almost clean of vegetation by the wind. The main road into Tully was flooded and several houses had roofs torn off, with crumpled tin lying in flooded fields.

At Innisfail, Bill Biscow stood in flood waters and cleaned up shredded pieces of roofing. "It was scary, but the damage is not as bad as last time when the place got flattened. Cyclone Larry probably blew away the oldest buildings."

In the coastal hamlet of Cowley Beach, steel roofs were torn from houses and twisted around power poles.

"I've been in the area for a long time and I've seen many of these, but this one is the biggest I've ever seen," said 84-year-old Robert Hurst, cleaning up his still-intact house.

Another resident, Maria Cook, returned from an emergency shelter to check on her home on the outskirts of Innisfail.

"I'm going to have to use a chainsaw to cut past trees and to get back inside," she said.

A weather bureau spokesman said a storm surge of two meters (six feet) above normal tides had inundated one stretch of coast but the surges were not as severe as authorities had feared.

The cyclone had cut electricity to about 200,000 homes, but main links to the power grid remained intact.

Queensland has had a cruel summer, with floods sweeping across it and other eastern states in recent months, killing 35 people and causing damage estimated at $10 billion or more.