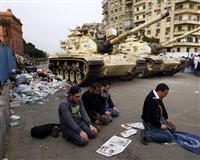 Six people were killed and hundreds wounded in attacks on anti-government protesters in Cairo, prompting new calls from his Western allies for President Hosni Mubarak to begin handing over power immediately.

The following are exerpts of reactions from around the world:

"I urge the Egyptian leadership not to let batons do the talking nor to block the media, but to be responsible and to deal with the demands of the demonstrators.

"The demonstrators and their valid demands cannot be silenced by violence. The political forces in the country must to everything to avoid a further escalation.

"It is more important than ever that speedy talks between the opposition and government take place so that the situation does not spiral further out of control."

"All these need to be established, also constitutionally. It is necessary that this transition to democracy, these changes take place with credibility, stability, that they happen quickly and without violence.

"I believe these democratic changes will give a new strength to Egypt, a new more powerful role which we will welcome for the region and the Arab world."

"She (Secretary of State Hillary Clinton) emphasized, again, (to Egyptian Vice President Omar Suleiman) our condemnation of the violence that occurred today, encouraged the government to hold those responsible fully accountable for this violence."

"I urge the Egyptian authorities to immediately take the necessary measures to ensure that the law enforcement authorities protect the demonstrators and their right to assembly freely.

I have made clear that it is the responsibility of the army and law enforcement to protect its citizens.

Last night we were sending messages to the Egyptian authorities in phone calls and other messages, saying 'look, you have to get the army in to protect the people, you have to make sure that we've got ambulances able to get in and out of the square'.

"We are observing a deterioration of the situation in Egypt with extreme concern.

We condemn all those who use or encourage violence, which will only worsen Egypt's political crisis.

Only a rapid and orderly transition toward a broadly representative government will allow Egypt to overcome the challenges that it is facing.

This process of transition must start now."