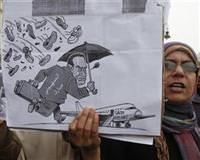 Egyptians gathered in central Cairo on Friday hoping to mass another million-strong rally to speed the end of President Hosni Mubarak's 30-year rule.

The United States, long the ally and sponsor of the 82-year-old former general and his politically influential army, were also working behind the scenes to have him hand over power.

Mubarak has insisted his departure would bring chaos. That has not discouraged protesters, ranging from Internet-aware young secularists to the powerful mass Islamist movement the Muslim Brotherhood, from declaring the "Friday of Departure."

In Tahrir, or Liberation, Square, the focus of protests and of violence with Mubarak loyalists in the previous two days, there was a festive atmosphere, with soldiers keeping order and the veteran defence minister, Field Marshal Mohamed Hussein Tantawi, paying a visit and talking to his soldiers.

Crowds were expected to build after midday prayers, the focal point of the Muslim weekend in Egypt.

The protesters, from a diverse range of Egypt's 80 million population, hope to encourage the unprecedented million-plus numbers on the streets of the nation's cities that they saw on Tuesday. On that evening, Mubarak announced he would step down, but only in September, when a presidential election is due.

Though many Egyptians felt that was good enough, and hoped for a return to normality after the disruptions which began on January 25, many want Mubarak to leave immediately. The United States and its Western allies, while refraining from saying he must quit now, have urged an immediate start to transition.

The armed forces, who have a crucial role to play, appear to be weighing their options, content to let demonstrators have their say in a way never before seen in Egypt. But also not moving directly against Mubarak, and allowing plain clothes loyalists to range the streets and attack protesters this week.

A senior U.S. official, who declined to be named, said on Thursday Washington was discussing with Egyptians different scenarios, including one in which Mubarak resigned immediately.

Mubarak, however, said he believed his country still needed him: "If I resign today, there will be chaos," Mubarak, who has promised to step down in September, told U.S. television channel ABC. Commenting on the calls resign, he said: "I don't care what people say about me. Right now I care about my country."

Those camping out in Tahrir Square were welcoming reinforcements through the morning, searching bags and checking for security agents. Tents were scattered around and some had slept on the grass, ready for the planned day of protest.

With the unprecedented challenge to Mubarak's autocratic rule descending into violence, Washington has been urging Egypt to begin the transition of power and move towards elections.

A senior official in the administration of President Barack Obama said various options were being discussed with Egyptian officials, including one in which Mubarak resigned immediately.

"That's one scenario," he said, speaking on condition of anonymity. "There are a number of scenarios, but (it is) wrong to suggest we have discussed only one with the Egyptians."

The New York Times cited U.S. officials and Arab diplomats as saying Washington was discussing a plan for Mubarak to hand over power to a transitional government headed by Vice President Omar Suleiman with the support of the Egyptian military.

However, it also quoted a senior Egyptian official as saying the constitution did not allow this. "That's my technical answer," he added. "My political answer is they should mind their own business."

Suleiman also hinted at irritation with U.S. interference in a television interview on Thursday.

"There are some abnormal ways by which foreign countries have intervened through press declarations and statements. This was very strange, given the friendly relations between us and them," he said.

Many of the protesters reject Suleiman as an alternative.

Obama and his top aides have carefully avoided calling for Mubarak's resignation, instead insisting that an orderly transition "must begin now."

The U.N. estimates 300 people have died in the unrest which was inspired in part by protests in Tunisia which forced Tunisian strongman Zine al-Abidine Ben Ali to flee last month and which have since spread to other parts of the Middle East.

In the most dramatic spike in violence, pro-Mubarak supporters attacked protesters in Tahrir Square on Wednesday and pitched battles broke out between the two sides. The government denied accusations by the protesters and international activists that they had instigated the attack.

The government has offered talks on reforms, but that has failed to satisfy protesters who want Mubarak to leave now.

They also say they want democracy rather than Mubarak's replacement by another leader drawn from the army, which has dominated Egypt since it toppled the monarchy in 1952.

A leading member of the Brotherhood told Al Jazeera television on Friday the group -- Egypt's most organised opposition group -- had no ambitions to run for the presidency.

Mohammed al-Beltagi also said government representatives who had invited it to talks on political reform had indicated that the group, which is formally banned, would receive official recognition as a party.

Egypt, which signed a peace treaty with Israel in 1979, has been a key U.S. ally in the Middle East. Mubarak had also styled himself as a bulwark against Islamist militancy.

The United States supplies the Egyptian army with about $1.3 billion (805.9 million pounds) in aid annually.

Mubarak described Obama as a very good man, but when asked by ABC if he felt that the United States had betrayed him, he said he told the U.S. president: "You don't understand the Egyptian culture and what would happen if I step down now."