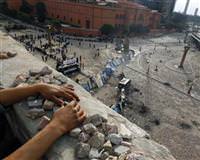 Saboteurs blew up a gas pipeline in northern Egypt in a further sign of the country's instability on a 12th day of demonstrations on Saturday against the 30-year-rule of President Hosni Mubarak.

Mubarak, who has reshuffled his government but refused to step down, met some of the new ministers on Saturday, the state news agency said, in a clear rebuff to the hundreds of thousands of people publicly demanding the 82-year-old leader step down.

Western governments have expressed support for the demonstrators but some were cautious about expecting too much too fast.

"There will be change in Egypt ... but it needs to be change in such a way that it is peaceful and orderly," German Chancellor Angela Merkel told a security conference in Munich where world leaders will discuss how to proceed.

At the same time, British Prime Minister David Cameron called for a rapid transition to new leadership and political reform.

"The longer it is put off, the more likely we are to get an Egypt we wouldn't welcome," he said.

Vice President Omar Suleiman was due to meet a group of prominent figures on Saturday to examine a proposed solution under which he would assume the president's powers for an interim period, one of the group's members said.

But with some of the protesters insisting they wanted not just Mubarak but also his allies out, it was unclear that would be enough to end the crisis.

Furthermore, the prime minister said on Friday that it was unlikely the president would hand presidential powers to his newly appointed deputy, Al Arabiya television reported.

"We need the president to stay for legislative reasons," Prime Minister Ahmed Shafiq was quoted as saying in a headline.

Mubarak, who has pledged to step down in September, said on Thursday he believed Egypt would descend into chaos if he were to give in to protesters' demands that he quit immediately.

He has styled himself as a bulwark against Islamist militancy and essential actor in maintaining a peace treaty Egypt signed with Israel in 1979.

State TV said on Saturday the pipeline that was attacked supplied both the Israeli and Jordanian gas lines.

Residents in the area also reported a huge explosion and said flames were raging in an area near the pipeline in the El-Arish area of north Sinai.

A security source said the Egyptian army closed the main source of gas supplying the pipeline which runs through North Sinai and state TV said the "situation is very dangerous and explosions were continuing from one spot to another."

"It is a big terrorist operation," a state TV reporter said.

The SITE intelligence group, which monitors al Qaeda and other Islamist websites, said earlier this week some groups had been urging Islamic militants to attack the pipeline to Israel.

Another security source in North Sinai said it was the Jordanian branch of the pipeline that had been struck, not the one leading to Israel, blaming the attack on "foreign elements."

Israel Radio said the Egypt-Israel pipeline was not damaged, but the supply stopped as a precaution.

"Saboteurs took advantage of the security situation and blew up the gas pipeline," a state television correspondent said.

Al Qaeda, which has its ideological roots in Egypt, has been largely sidelined in the protests against Mubarak.

The government in the past has used a perceived threat from Islamist militancy to justify its use of emergency laws which helped keep Mubarak in power.

With the unrest crippling the economy in the Arab world's most populous nation, some Egyptians are anxious to return to normal. Banks were due to reopen on Sunday, the start of the week in Egypt, and the stock market on Monday.

In Cairo's Tahrir Square, the hub of demonstrations, protesters occupying the usually busy intersection in the heart of the city said they were not giving up.

"Leave, leave, leave," people camped out in the square -- scene of violent clashes this week between anti-government protesters and Mubarak loyalists -- chanted.

"We are not leaving the square until our demands are met," one of them shouted over a loudspeaker, after a relatively peaceful night where some sang patriotic songs and chanted poetry over loudspeakers talking of victory over Mubarak.

Hundreds of thousands of Egyptians held mostly peaceful demonstrations across the country on Friday.

The United States has been pressing Mubarak to begin a transfer of power and pave the way for democracy in a country which has been dominated by the military since it toppled the monarchy in 1952.

Mubarak would stay on in a symbolic position under the proposal being promoted by the group of Egyptians calling itself the "The Council of Wise Men," allowing him to serve out his tenure with some dignity.

Some protesters however say they want a complete break with the past, while Obama has also called for "meaningful" change.

And while some analysts say transferring powers to Suleiman could help defuse the crisis, others argue it needs a bigger step shift to pave the way for free and fair elections.

The unprecedented challenge to Mubarak has rallied many different strands of society -- professionals and the poor, secular and religious, Muslims and Christians, internet-savvy youth with members of the Muslim Brotherhood Islamist movement.

The United Nations estimates 300 people have died in the unrest, inspired in part by protests in Tunisia which forced veteran strongman Zine al-Abidine Ben Ali to flee last month.