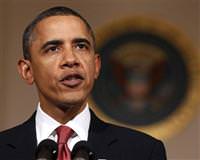 President Barack Obama said on Friday he hoped Egyptian President Hosni Mubarak will make "the right decision" to steer his country through mass protests against his rule but stopped short of urging his resignation. Skip related content

Since large demonstrations against Mubarak's 30-year rule began 11 days ago, Washington has gradually distanced itself from its long-time ally and called for "an orderly transition" to democracy to begin immediately.

In what may have been a bid to quash a report that U.S. and Egyptian officials discussed Mubarak's immediate resignation in favour of Vice President Omar Suleiman, Obama stressed that "the future of Egypt will be determined by its people."

However, the U.S. president also pointedly noted that Mubarak has already announced he will not seek reelection in September and that "his term is up relatively shortly."

"Having made that psychological break, that decision that he will not be running again, I think the most important thing for him to ask himself ... is how do we make that transition effective and lasting and legitimate," Obama said at a news conference with Canadian Prime Minister Stephen Harper.

"The key question he should be asking himself is: how do I leave a legacy behind in which Egypt is able to get through this transformative period?' And my hope is ... that he will end up making the right decision," Obama said.

Egypt has been a U.S. ally throughout Mubarak's tenure and it is strategically vital to American interests because of its peace treaty with Israel, control of the Suez Canal and steadfast opposition to militant Islam.

After two days of clashes between Mubarak loyalists and anti-Mubarak protesters and efforts to cut off news coverage of the demonstrations, Obama said the rights of protesters, human rights activists and journalists must be respected.

"The only thing that will work is moving (an) orderly transition process that begins right now, that engages all the parties, that leads to democratic practices, fair and free elections, a representative government that is responsive to the grievances of the Egyptian people," he added.

U.S. officials have been loath to abandon an ally, on whom they have relied to secure Israel's western border and promote a wider Arab-Israeli peace, in part because it could signal to other Arab allies that they are fair-weather friends.

While it has become clear to U.S. officials that the huge demonstrations in Egypt -- more than a million people turned out on Tuesday -- show a marked turn against Mubarak, they are reluctant to be seen as interfering directly in its affairs.

Obama called Turkish Prime Minister Tayyip Erdogan on Friday and the two leaders discussed the events in Egypt "and their shared commitment to a future that realizes the aspirations of the Egyptian people," the White House said.