Views of other countries on Egypt crisis 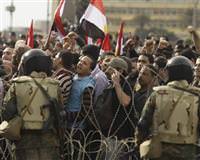 Following are views of key foreign players on Egypt's political crisis and a transition beyond President Hosni Mubarak.

The Obama administration said the transition must begin now. U.S. officials said they are discussing with Egyptians a variety of ways of moving toward an orderly transition of power in Egypt that could lead to the swift departure of Mubarak.

One scenario would entail Mubarak leaving immediately, but Washington is discussing others, a senior U.S. official said on Thursday.

U.S. lawmakers are calling on Mubarak to immediately transfer power to an interim government in coordination with leaders from Egypt's opposition, civil society and military.

Supreme leader Ayatollah Ali Khamenei on Friday saluted an "Islamic liberation movement" in the Arab world and advised Egyptians to unite around their religion and against the West.

Khamenei warned them against compromising with any leader who might win Western approval and called on Egypt's army to back the protesters and "focus its eyes on the Zionist enemy" Israel.

Israel is looking for stability in Egypt, fearing a change of leadership could jeopardize its 1979 peace treaty with its neighbor and usher in a radical Islamist line in Cairo.

Prime Minister Benjamin Netanyahu called on Wednesday for "bolstering Israel's might" in response to the turmoil in Egypt, while at the same time seeking to pursue peace efforts with the Palestinians.

European Union leaders called on Egyptian authorities to meet the aspirations of the people with "reform not repression" and said the transfer of power to a broad-based government must begin immediately.

"All parties should show restraint and avoid further violence and begin an orderly transition to a broad-based government. The European Council underlined that this transition process must start now," the EU's 27 leaders said in a statement issued on Friday during a summit in Brussels.

Russian President Dmitry Medvedev urged Mubarak by telephone on Thursday to resolve the crisis in Egypt in a peaceful and lawful way.

Moscow has good relations with Mubarak and wants to increase its role in a region where it has close ties with other Arab nations.

Medvedev "expressed the desire and hope that the current difficult period in the life of friendly Egypt will be overcome soon through the peaceful resolution of existing problems within a lawful framework," the Kremlin said in a statement.

Turkey has seen its influence in the Middle East rise in recent years and is often held up in the West as a model for democracy in Muslim nations.

"It is very important to get over this period with a temporary administration," Turkish state-run Anatolian news agency quoted Erdogan as saying during a visit to Kyrgyzstan.

"People expect Mubarak to take a much different step."

Italian Prime Minister Silvio Berlusconi on Friday praised Egyptian President Hosni Mubarak as a wise man and called for an orderly transition with "continuity in government."

"I hope that in Egypt there can be a transition toward a more democratic system without a break from President Mubarak, who in the West, above all in the United States, is considered the wisest of men and a precise reference point," he said.