Turkey model is named the solution 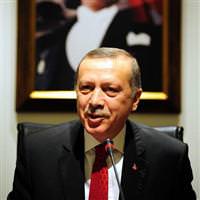 Analysis in both the NATO Defense College report and the The New York Times has reached the same assessment: Egypt should use the Turkey model as an example.

For days now, the 'Turkey model' has been brought up in discussion of establishing peace and stability in the Middle East. This thesis was also most recently brought up in two separate analyses by the New York Times and the NATO Defense College, where NATO commanders and diplomats are trained. The NATO College report, states the following:
AN HONOURABLE SITUATION
"Even if it is uncomfortable for some, the Arab public envisions the Turkish regime as a model. Turkey is proud of its republic and democracy, its openness to the world, strong economy and balanced foreign policy."
ISLAM - DEMOCRACY - ECONOMY
The New York Times analysis states that Egypt can learn valuable lessons from Turkey. "Arriving at a template that effectively integrates Islam, democracy and vibrant economics has been a near-impossible dream for Middle East reformers stretching back decades. "
Both The New York Times and the NATO Defense College assert that Turkey could be an example for Egypt. According to the analysis provided by the newspaper, which qualifies Prime Minister Recep Tayyip Erdoğan, who called on Egyptian State Leader Husnu Mubarak to listen to the protesters on the street, as possibly being the Middle East's most influential figure, Egypt could benefit from the Turkey model.
The newspaper article penned by Landon Thomas Jr. with contributions by Helene Cooper provides the perspectives of a number of Middle East analysts which emphasize that as Egypt tries to reinvent itself, there may be a number of valuable lessons to be learned from using Turkey as a base for guidelines. The article emphasizes that the 'Turkey model', which has successfully unified Islam and democracy as well as strong economy, "has been a near-impossible dream for Middle East reformers stretching back decades." Accordingly, it states that Egypt's failure to accommodate the three themes of Islam, democracy and a strong economy is a basis of its current struggle. "As a result," the article states, "diplomats and analysts have begun to present the still-incomplete Turkish experiment as a possible road map for Egypt."
International Crisis Group Turkey Director Hugh Pope states, "Turkey is the envy of the Arab World," and goes on to mention that with its strong democracy, has selected a leader who addresses the "popular mood" and produces products that are well known in the Islamic world, all the way from Afghanistan to Morocco. Pope mentions how dozens of Turkish television shows are broadcasted dubbed in Arabic. Pope also states that Turkey's economy is practically worth half of the Arab world collectively. Pope also touches on US President Barack Obama's first trip to a Muslim nation being to Turkey and that Turkey was "hailed as a Middle East model."
OBAMA DIALOGUE
The article also brings up the fact that with the onset of the crisis in Egypt, US President Obama telephoned Prime Minister Erdoğan twice in six days to discuss the unfolding events and that administration officials were in close contact with their Turkish counterparts at all levels. One official, who chose to remain anonymous, states, "There's no question that Turkey can play a role." The article goes on to call Prime Minister Erdoğan a pragmatist at the root and even though he has been jailed in the past is now working within Turkey's democratic system and states that "he is recognized as perhaps the Middle East's most influential figure."
NATO DEFENSE COLLEGE
NATO's Defense College in Rome, where commanders and diplomats are educated, released a report which mentions that Turkey is the most appropriate model for Egypt. The college's report, which analyzes the public uprisings experienced in Northern Africa and the Middle East, suggests that Egypt look to Turkey as an example. The report states that even if it is uncomfortable for some, the Arab public perceives the current regime in Turkey as a model. Turkey's regime is stated as being undoubtedly republican and democratic and that the military no longer makes attempts to take over the government. The report also states that Turkey acts as referee to ensure certain borders are not crossed and is in favor of economic globalization and adheres with respect to the principles of free trade. The report also states that based on solid and strong principles, Turkey has experienced unbelievable economic growth and above all else, is proud of its foreign policy. According to the report, Egypt should use the Turkey model as inspiration to establish a balanced regime that is Islamic, open to the west and protective of the Coptic Christians.