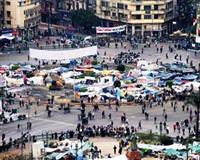 The United Nations on Sunday drove home the warning from Western nations that a transition to democracy in Egypt should not be rushed to avoid worsening the crisis and destabilising the entire Middle East.

U.N. Secretary-General Ban Ki-moon backed up calls at a security conference in Munich from the United States and Europe for a rapid change of power in Egypt followed by a more sedate transition through democracy and eventually free elections.

Ban told reporters he had urged authorities in Cairo "to make the necessary changes and reforms as soon as possible. I hope the leaders of Egypt heed the calls of their own people."

That was in tune with the message delivered in Munich by U.S. Secretary Hillary Clinton, Britain's David Cameron and Germany's Angela Merkel that 82-year-old President Hosni Mubarak should step down now, if that is what the Egyptian people want.

"The more this is put off, the more we are likely to get an Egypt that we wouldn't welcome," said Cameron.

"There will be a change in Egypt," said Merkel, who added that it would be remiss of the international community "not to side with people who are speaking out against injustice."

But Western leaders and diplomats were careful to emphasize that it should be the Egyptians who decide.

The U.N. secretary-general, asked about the debate over whether Mubarak should leave immediately as protesters demand or stay to oversee reform, answered: "It's something which should be left to the Egyptian people."

European diplomats attending the Munich meeting bristled at the suggestion of the retired U.S. diplomat Frank Wisner, sent by President Barack Obama to talk to Mubarak, that he should remain for an unspecified period to steer through reforms.

The State Department distanced itself from Wisner's remarks, saying it not necessarily share his views.

"We are very unhappy about Wisner's remarks which give the impression the West wants to influence decisions which should be left up to the Egyptians," said a European diplomatic source.

Turkish Prime Minister Tayyip Erdogan also sounded a note of caution. "A democratic transition must be ensured in the shortest possible time. If this is achieved I believe the people will certainly accept such an outcome," he told reporters.

"But first the ground must be prepared ... A reliable administration would provide the opportunity for such a base -- this could be an interim election administration."

Merkel told the conference that her experiences from the fall of the Berlin Wall in 1989 had taught her that rushing into democratic elections was counterproductive and Egypt should take its time, once Mubarak departs, to prepare its institutions.

Washington also emphasizes the need for gradual transition to democracy after nearly two weeks of protests against Mubarak's 30-year regime, while Cameron said it was not a matter of "flicking a switch and holding an election.

Ban Ki-moon linked the unrest in Egypt and other Arabic countries including Tunisia to the stalled Middle East peace process, in which he said Mubarak had been a "key player."

The U.N. chief said the turmoil directed against leaders in "Egypt and elsewhere in Arab countries" was a cause for concern because of the impact on regional stability.

"That is why we would like to see this transition take place in an orderly manner, without having any negative sudden impact on overall peace and stability in this region," said Ban.

Some U.S. and German media reported that Mubarak could leave for Germany where he has had medical treatment in recent years. German Foreign Minister Guido Westerwelle told Reuters he would not speculate on such reports.