Ankara receives a message from Cairo 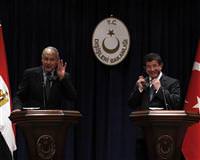 Cairo has responded in reproach to Ankara's comments regarding Egyptian President Hosni Mubarak.

Turkey's Ambassador to Cairo Hüseyin Avni Botsalı was first called to the Egyptian Ministry of Foreign Affairs, where it was expressed that Egypt was uneasy with intervention into domestic affairs. Then yesterday, Egypt's Ankara Ambassador Abdurahman Selahaddini, presented a letter penned by Egypt's Minister of Foreign Affairs Aboul Gheit to Turkey's Foreign Affairs Minister Ahmet Davutoğlu. The same discomfort felt in what they considered to be an intervention in the Egyptian public's domestic affairs, which had been relayed to Botsali was reiterated in the letter to Davutoğlu.
Last Update: Feb 08, 2011 2:29 pm
RELATED TOPICS