Activist's tears may be game changer in Egypt 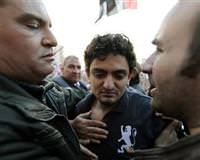 One man's tears provided a new impetus on Tuesday to protesters in Egypt seeking to keep up momentum in their campaign, now in its third week, to topple President Hosni Mubarak.

Wael Ghonim, a Google executive detained and blindfolded by state security for 12 days, broke down in a television interview on Monday after his release saying a system that arrested people for speaking out must be torn down.

"Ghonim's tears have moved millions and turned around the views of those who supported (Mubarak) staying," website Masrawy.com wrote two hours after Ghonim's TV appearance. In that short span, 70,000 people had signed up to Facebook pages supporting him.

Egypt's turbulent protests have entered their third week. Demonstrators have been camping out in Tahrir Square for days to press their demand that Mubarak, a U.S. ally who has ruled for 30 years, quit now.

On Tuesday, Ghonim joined them for another mass protest that drew in well over 100,000 people.

"My condolences to the fathers and mothers who lost sons and daughters who died for their dream. These are the real heroes who gave up their lives for their country," he told Reuters afterwards. "I saw young people dying and now the president has a responsibility to see what the people demand," he said, adding these demands include Mubarak stepping down.

SEIZED OFF THE STREETS

Google's head of marketing in the Middle East, Ghonim was seized off the streets by plainclothes men two days after the protests began on January 25 -- protests he had promoted by setting up a special Facebook page.

Neither Google nor his family had any clue where he was and feared for his life. In detention he was not informed of events outside and interrogated over what the authorities believed were foreign powers behind the Facebook campaign and January 25 protest.

When the interviewer told Ghonim live on TV about some of the 300 people who died in the unrest while he was incarcerated, he cried.

"We didn't do anything wrong. We did what our consciences dictated to us," he said in the interview, overcome with remorse for his role in mobilizing people through the Internet.

Within minutes of the interview's conclusion, thousands had joined new pages on social networking sites.

"I authorize Wael Ghonim to speak in the name of Egypt's revolutionaries" -- the main support page -- had gathered more than 120,000 "likes" within 12 hours.

"I knew about 200 people who supported Mubarak and wanted the revolution to end. But after they saw Wael Ghonim and the lies of Egyptian media they will go to Tahrir," Mida Acura wrote on one of the Facebook pages.

State TV has portrayed the protesters who have closed off Tahrir, a pivotal urban space in central Cairo, as irresponsible radicals who are destroying the economy and have been manipulated by unspecified foreigners.

The government has been piling on pressure for the protesters to leave. It says they are holding up an economic recovery after damage caused by the uprising. Some Cairenes are annoyed by the inconvenience of the 24-hour sit-in.

Mubarak supporters staged violent attacks on them last week, leaving 11 dead and over 1,000 wounded. An army commander asked them to quit the square to "save Egypt".

"Wael Ghonim is the Bouazizi of the Egyptians," wrote journalist Mohamed al-Jarhi, referring to the Tunisian Mohamed Bouazizi who helped launch Tunisia's own uprising last month by setting himself on fire in protest at poverty and corruption.

Activists used Facebook, Twitter and other social media to spread word of protests after Tunisia's ruler Zine al-Abidine Ben Ali fled on January 14. It was so effective that Egypt's government shut down the Internet for days during the uprising.

In the outpouring of Internet activity early on Tuesday, users posted the pictures of many of those who died and many who had been prepared to give the 82-year-old leader a chance said now they wanted to push on until Mubarak caves in.

Activists say Ghonim's tears contrast with the lack of remorse that protesters perceive from Mubarak. He made no mention of the deaths in a speech to the nation last week.

"Something big is happening. No one expected today to be that huge," Zainab Mohamed, a well-known Egyptian blogger who uses the name Zeinobia, told Reuters.

"Hundreds of young people are killed all over the country and Mubarak didn't have the courtesy to say we're sorry or express his sorrow to the families. Wael's tears were much more sincere."