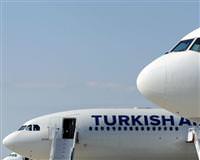 EU regulators said on Friday they had begun separate probes into two airline cooperation agreements -- between Lufthansa and Turkish Airlines and between Brussels Airlines and TAP Air Portugal.

The European Commission, which acts as the competition authority for the 27-member bloc, said it had opened the investigations on its own initiative.

It said in a statement it wanted to verify if the code-sharing deals and their cooperation on ticket sales breached EU rules on anti-competitive agreements.

"While code-share agreements can provide substantial benefits to passengers, some types of such agreements may also produce anti-competitive effects," it said.

"These investigations focus on a particular type of code-sharing arrangement where these airlines have agreed to sell seats on each others' flights on the Germany-Turkey routes and on the Belgium-Portugal routes," it said.

Both companies already operate their own flights between their hubs and should, in principle, be competing with each other, the statement added.

The Commission said such an investigation did not mean it had conclusive proof of an infringement and that it will look into the cases as a matter of priority.

Lufthansa owns a 45-percent stake in Brussels Airlines, with the option to buy the remaining 55 percent in 2011.