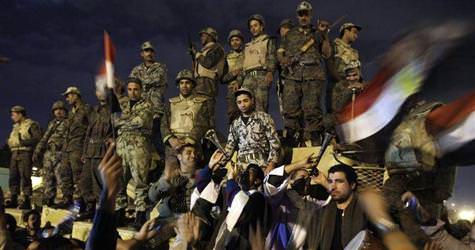 Egyptians woke to a new dawn on Saturday after 30 years of autocratic rule under Hosni Mubarak, full of hope after achieving almost unthinkable change, with the army in charge and an uncertain future ahead.

As the muezzin's call to prayer reverberated across Cairo, the sound of horns honking in jubilation grew louder after a night when millions across the Arab world's most populous nation joyfully celebrated the fall of the president.

"The people overthrow the regime". "The Revolution of the Youths forced Mubarak to leave", said front-page headlines in the semi-official al-Ahram newspaper.

It remains to be seen how the armed forces' high command will create the foundations of democracy for the first time in a nation that traces its history back to the pharaohs more than 5,000 years ago.

A wave of people power has roared across this key American ally in the Middle East, just four weeks after Tunisians toppled their own aging strongman. Now, across the region and beyond, autocratic rulers are calculating their own chances of survival.

"The January 25 Revolution won. Mubarak steps out and the army rules," said the official newspaper Al-Gomhuria. Mubarak, 82, was thought to be at his residence in the Red Sea resort of Sharm el-Sheikh.

"We are finally going to get a government we choose," said 29-year-old call-center worker Rasha Abu Omar. "Perhaps we will finally get to have the better country we always dreamed of."

The army dismantled checkpoints on Saturday morning around Tahrir Square, which has become the epicenter of the protest movement, and some makeshift barricades were being removed. There was a party atmosphere and people were once again streaming in to the square not to demonstrate but to celebrate.

Hours after word flashed out that Mubarak was stepping down and handing over to the army, it was not just Tahrir Square but, it seemed, every street and neighborhood in Cairo, Alexandria and cities and towns across the country that were packed full.

Through the night fireworks cracked, cars honked under swathes of red, white and black Egyptian flags, people hoisted their children above their heads. Some took souvenir snaps with smiling soldiers on their tanks on city streets.

All laughed and embraced in the hope of a new era.

Journalists long used to the sullen quiet of the police states that make up much of the Middle East spoke of feeling the optimism of a celebrating population anticipating a new chapter in Egyptian history, however uncertain that might be.

Relayed by satellite television channels, SMS messages, and Internet social networking sites, Egypt's new-found euphoria flashed around a region where autocrats hold sway from the Atlantic to the Gulf.

Mubarak was the second Arab leader to be overthrown in a month. Tunisian President Zine al-Abidine Ben Ali was forced to flee his country when the generals told him they were not prepared to defend him against protesters.

Now Mubarak, who at the start of the year seemed ready to establish a new dynasty on the Nile by handing over to his businessman son, sits, impotent, in Sharm el-Sheikh and his generals hold power in Cairo.

In Algiers, thousands of police in riot gear were preparing to stop a planned demonstration there on Saturday from mimicking the uprising in Egypt. Officials have banned the opposition march, setting the stage for possible clashes.

"It's going to be a great day for democracy in Algeria," said Mohsen Belabes, a spokesman for the small RCD opposition party, one of the organizers of the protest.

In Bahrain, the oil-rich Gulf kingdom, officials were handing out cash worth over $2,500 to every family, to appease them ahead of protests opposition groups plan for Monday.

In non-Arab Iran, leaders hailed the victory of the people over a leader seen in Tehran as a puppet of Washington and Israel. But the White House said a clampdown on media coverage of the events in Egypt showed that Iran's Islamist rulers were "scared" of pro-democracy activists who have said they may renew the street protests that rocked Tehran in 2009.

"It's broken a psychological barrier not just for North Africa but across the Middle East. I think you could see some contagion in terms of protests; Morocco, perhaps Jordan, Yemen," said Anthony Skinner of political risk consultancy Maplecroft.

Beyond the Arab world, China -- wary of any foreign upheavals that could reflect badly on its own authoritarian controls -- gave its first reaction in the official China Daily.

"Social stability should be of overriding importance. Any political changes will be meaningless if the country falls prey to chaos in the end," the English-language newspaper said.

THE END, AT LAST

Mubarak's political end was swift, coming less than a day after he had stunned protesters by insisting he would not step down despite widespread expectations that he was about to do so.

Vice President Omar Suleiman said a military council would run the country of 80 million for now. The council gave few details of what it said would be a "transitional phase" and gave no timetable for presidential or parliamentary elections. It said it wanted to "achieve the hopes of our great people".

Some question the army's appetite for democracy. Western powers, and Israel just across the Sinai desert border, worry about the electoral strength of Islamist groups.

In the United States, Mubarak's long-time sponsor, President Barack Obama said: "The people of Egypt have spoken." He stressed to the U.S.-aided Egyptian army that "nothing less than genuine democracy" would satisfy people's hunger for change.

He also acknowledged: "This is not the end of Egypt's transition. It's a beginning. I'm sure there will be difficult days ahead, and many questions remain unanswered."

Washington has pursued a sometimes meandering line since the protests began on January 25, apparently reluctant to lose a bulwark against militant Islam in the Middle East but also anxious to endorse calls for political freedom.

There is concern in some political circles in Washington about the rise of the Islamist Muslim Brotherhood organization and the possibility they will gain political momentum.

END OF BEGINNING
Behind the celebrations, there was a note of caution over how far the armed forces under Field Marshal Mohamed Hussein Tantawi, Mubarak's veteran defense minister, were ready to permit democracy, especially since the hitherto banned Muslim Brotherhood is one of the best organized movements.

"This is just the end of the beginning," said Jon Alterman of the Center for Strategic and International Studies.

"Egypt isn't moving toward democracy, it's moved into martial law and where it goes is now subject to debate."

Suleiman, a 74-year-old former spy chief, annoyed some this week by questioning whether Egyptians were ready for democracy.

Al Arabiya television said the army would soon dismiss the cabinet and suspend parliament. The head of the Constitutional Court would join the leadership with the military council.

The best deterrent to any attempt to maintain military rule could be the street power of protesters who showed Mubarak they could render Egypt ungovernable without their consent.

But as continued turmoil in Tunisia shows, a month after the overthrow of the strongman there inspired young Egyptians to act, any government will face huge social and economic problems.