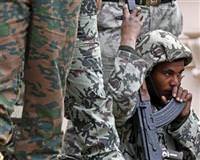 Egypt's military has signaled that real change is on the way, reassuring the popular movement that toppled Hosni Mubarak, but leaving many questions hanging.

Any sign the army is reneging on its promises of democracy and civilian rule could reignite mass protests on the street.

Pro-democracy campaigners welcomed the army's decisions on Sunday to suspend the constitution, dissolve parliament and submit any constitutional amendments to a referendum.

But uncertainty remains over how much influence the military will seek to exert in reshaping a corrupt and oppressive ruling system which it has propped up for six decades.

For a hint of the scale of the transformation required, listen to Hisham, one of hundreds of policemen who staged a wage protest outside the Interior Ministry:

"The high-ranking officers are the ones who used to get all privileges and we were left to starve. We were told that if we didn't like it, we could take money from the people."

It is also unclear how much freedom the army will allow in a transition period it says could last as little as six months.

A call by protesters for Egyptians to turn out in millions for a "victory march" on Friday may serve as an early reminder to the military of the people power that swept Mubarak away.

"The two big questions now are who is going to be on the constitutional committee to redraft (the constitution), and are there any guarantees that what they come up with is then going to be deemed the way ahead," said Rosemary Hollis, professor of Middle East Policy Studies at City University London.

"The demonstrators and all the people supporting massive change need as many indicators as possible that their voices have been heard and will feature in the changes coming."

She said the military-political infrastructure could "go into automatic" pending constitutional changes and elections: "The danger is that when they are on automatic there will be no guarantees of individual freedom and security."

Nevertheless, Sunday's military statement came as a relief to democracy advocates who had fretted that the army might obstruct sweeping change after Mubarak's removal.

"It is a victory for the revolution. I think this will satisfy the protesters," said Ayman Nour, who had the nerve to run against Mubarak in 2005, only to be jailed soon afterward.

"This resolution satisfies the Egyptian street, especially the part related to dissolving the parliament and shura council (upper house)," he said. "We must have dialogue with the military council about putting a temporary, constitutional document to manage affairs in the transitional period."

The army, keen to return Egypt swiftly to normal life, reasserted control of Cairo's Tahrir Square, where protesters debated hotly whether they should go or stay on to guard the revolution's gains and pursue the "people's demands."

The army, which gets $1.3 billion a year in U.S. aid, played a key role in the anti-Mubarak revolt by making no effort to crush it -- and has come to power on the back of the revolution.

Egyptians generally respect the 470,000-strong military, which was shielded from public criticism or scrutiny in the Mubarak era, but some mistrust its intentions.

"The army has started using 'revolutionary legitimacy' as a basis for its actions," said Hassan Abu Taleb, an analyst at Cairo's Al-Ahram Center for Political and Strategic Studies.

"The army's commitment to a civilian and freely elected government, parliament, and an open space for political parties is a good sign," he said, but much remained uncertain.

Will the military seek a role similar to that played by its counterpart in Turkey, which for decades exerted political influence as the privileged guarantor of the secular republic?

"There are still a lot of grey areas, but it is clear that these decisions are opening the door for an entirely new system to come to order," Abu Taleb said.

Any transition to democracy will be fraught with difficulty and old ways of doing things may die hard in a country where the ruling party routinely rigged elections and candidates used bribery, hired thugs and dirty tricks to ensure victory.

Existing registered parties are mostly small, weak and fragmented. The Muslim Brotherhood, which under the now suspended constitution could not form a party, may be the best organized group, but its true popularity has yet to be tested.

"The pattern is that the most powerful families always win the elections," said Hisham Kassem, an Egyptian human rights activist and publisher. "These same families will win again with new faces, but via what political groups?"

Previously candidates from powerful clans ran on the ruling National Democratic Party (NDP) ticket or as "independents" allied to it. With Mubarak gone, Kassem said, "the NDP has completely collapsed, no one will run on that platform."