Reaction to fall of Mubarak around Middle East 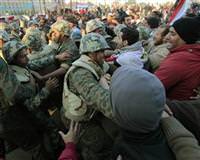 Below is reaction from the Middle East to a revolt in Egypt which toppled veteran leader Hosni Mubarak on Friday.

-- Saudi Arabia, which had supported Mubarak throughout the mass protests, said on Saturday that it welcomed the peaceful transition of power in Egypt.

* "The government of the Kingdom of Saudi Arabia welcomes the peaceful transition of power in the Arab Republic of Egypt, and expresses hope in the efforts of the Egyptian armed forces to restore peace, stability and tranquility," the SPA agency said.

-- Bahrain respects the choice of the Egyptian people, the pro-government Al Watan newspaper quoted a government statement as saying on Saturday.

* Bahrain also said it was confident of "the continuation of Egypt's leading role in the common Arab work and defending the interests of the (Arab) nation" and said it was interested in developing its relationship with Egypt, Al Watan said.

-- In remarks to reporters that echoed a written statement issued on Saturday, Prime Minister Benjamin Netanyahu voiced satisfaction that Egypt's military leadership had announced it would respect all the country's international treaties.

-- "The peace agreement was kept by Egypt throughout the years ... it is the cornerstone of peace and stability, not only for the two countries, but for the whole region as well," Netanyahu said at the start of a cabinet meeting in Jerusalem.

-- Against a background of spreading anti-government protests in Yemen, the official news agency Saba said the government was confident Egypt's Higher Military Council would be able to manage the country's affairs in the transition period.

* Saba, quoting an official source, said Yemen was keen to strengthen relations and would support the Egyptian people "in everything that would bring them stability, progress and development."

-- The state controlled newspaper al Watan referred to a statement by the military council which it said had called the uprising a revolution against the "social and economic problems of Egypt."

In the newspaper's view, the revolution was also against Egyptian foreign policy and "succumbing to American dictates" and the Egyptian alliance with Israel and Egyptian efforts to undermine the resistance, referring to the militant groups Hezbollah and Hamas.

-- Turkey called for elections to be held in Egypt in the wake of Mubarak's resignation, so that the military can hand over power to a democratically elected government as soon as possible.

* "Free and fair elections should be held as soon as possible, with no toleration of chaos, instability or provocations, and constitutional democracy should be secured," Turkish Prime Minister Tayyip Erdogan said on Saturday.

* "The will of the Egyptian people should be reflected in the election results without any doubt cast on the legitimacy of the election," Erdogan was quoted as saying by state-run Anatolian news agency.

* "I congratulate the great Egyptian nation for this victory and we share their happiness," Iranian Foreign Minister Ali Akbar Salehi was quoted as saying by state television.

"We hope that the civil movement in Egypt can complete its victory through resistance and by a strong will so that it can successfully reach all its demands."

* "The resignation of President Hosni Mubarak is a step in the right direction because it came as a response to Egyptians' desire and will for change, and we have confirmed trust that our sister Egypt and its great people, with their experience, history and efficiency, will select leadership that will fulfill their ambitions and keep Egypt's security, stability and great position in the world," said Iraqi Prime Minister Nuri al-Maliki.

-- "The UAE, which has closely monitored developments in Egypt, confirms its confidence in the ability of the Supreme Council of the Armed Forces in running the country's affairs in these delicate circumstances in such a way that would realize aspirations and hopes of the Egyptian people," the statement from the Emirates News Agency said.

-- "This is a positive, important step toward the Egyptian people's aspirations of achieving democracy and reform and a life of dignity," said a statement from the Emir's royal council said.