Bahrain protesters camp out after day of unrest 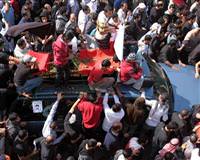 Shi'ite protesters prepared to camp out in Bahrain's capital on Tuesday after a day of protests in which a man was shot dead in clashes with police at a funeral for a demonstrator shot the day before.

The deaths raised the prospect of further clashes between Bahrain's majority Shi'ite Muslims and the Sunni security forces backed by the ruling Al Khalifa dynasty.

"We'll stay until the government finds a solution for the people of Bahrain," said Naji Abdelkareem, as other protesters set up a large tent on grass at Pearl Roundabout.

There were a dozen tents and activists handed out blankets, food and water. Protesters organized a lost-and-found service and said one tent would supply medical services. Others collected garbage and helped keep traffic flowing.

"Maybe this will be a Tahrir Square. This square is at the heart of Bahrain now," said Abdelkareem, referring to protests that led to the fall of Egyptian President Hosni Mubarak.

Enraged mourners chanted anti-government slogans inspired by protests that toppled the rulers of Egypt and Tunisia.

"The people demand the fall of the regime!" they chanted as thousands poured into Pearl Roundabout after marching from the funeral on the outskirts of Manama.

Protesters said their main demand was the resignation of Prime Minister Sheikh Khalifa bin Salman al-Khalifa, who has governed the Gulf Arab state since its independence in 1971.

An uncle of King Hamad bin Isa al-Khalifa, he is thought to own a great deal of land and is seen as a symbol of the wealth of the ruling family.

"Protesters don't want to topple the ruling family, but the end of this government and the prime minister," said Ali, a 49-year-old demonstrator who declined to give his full name.

Protesters say they are also demanding the release of political prisoners, which the government has promised, and the creation of a new constitution.

Poverty, high unemployment and alleged attempts by the state to grant citizenship to Sunni foreigners to change the demographic balance have intensified discontent among Bahrain's Shi'ites.

Around half of the tiny island kingdom's 1.3 million people are Bahraini, with the rest being foreign workers. The majority of citizens are Shi'ite.

2,000 PEOPLE WERE ESCORTING BODY
Witnesses said Tuesday's clashes broke out when around 2,000 people set out from a hospital to escort the body of slain protester Ali Mushaima through the alleys of a Shi'ite village.

Amnesty International urged Bahraini authorities to "thoroughly investigate what occurred, stand down the police involved in these shootings and make clear to the police that the use of excessive force will not be tolerated."

King Hamad expressed his condolences for "the deaths of two of our dear sons" in a televised speech and said a committee would investigate the killings.

"We will ask legislators to look into this issue and suggest needed laws to resolve it," he said, adding that peaceful protests were legal.

Stability concerns pushed up the cost of insuring Bahrain's debt to the highest level since August 2009, with 5-year credit default swaps rising 12 basis points, according to Markit.

Mushaima, the 22-year-old man being buried on Tuesday, was killed on Monday in clashes in Daih village as security forces clamped down on Shi'ite areas in the Gulf Arab kingdom.

Bahrain, in a move appeared aimed at preventing Shi'ite discontent from boiling over, had offered cash payouts of around 1,000 dinars ($2,650) per family in the run-up to the February 14 protests, held mainly in Shi'ite villages outside of Manama.

Some protesters said that was not the solution: "Don't feed me, give me my freedom and I can eat on my own," said the protester Ali, from a Shi'ite village.

Bahrain, unlike its Gulf Arab neighbors, has little spare cash but has also said it will spend an extra $417 million on social items, including food subsidies, reversing attempts to prepare the public for cuts.