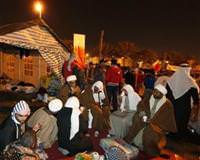 Bahrain, a non-OPEC oil-producer and home to the U.S. Navy's Fifth Fleet, has a Shi'ite Muslim majority population but is governed by the Sunni Muslim Al Khalifa dynasty.

King Sheikh Hamad bin Isa Al Khalifa rules the island kingdom, where half of the 1.3 million people population are expatriates.

Here is a list of the opposition and protesters' demands:

* Many Bahraini Shi'ites say they face discrimination in housing, healthcare and access to government jobs, a charge the government denies. Discontent has been expressed in on-and-off unrest since the mid-1990s.

* The introduction of a new constitution and parliamentary elections a decade ago helped quell the Shi'ite unrest, but tensions have risen again in recent years as Shi'ites have been disappointed with the assembly's limited clout.

* The main Shi'ite opposition group, Wefaq, won all 18 seats it contested in parliamentary elections in October, out of a total of 40. It competes with Sunni Islamist groups and the secular group Waad in parliament.

* The Shi'ite majority want the government to stop granting Sunnis from outside Bahrain citizenship and jobs in the armed forces and national security services to try to change the demographic balance.

* A statement from Bahraini activists said the revolution would begin on February 14 with peaceful rallies around Bahrain and continue until their demands were met.

* They called for changes and reforms in the country's governance and administration system.

* Dissolving the constitution of 2002.

* Formation of a council made up of experts and people of both the Sunni and Shi'ite sects to create a new constitution.

* Release of all political prisoners and activists and investigation of torture allegations.

* Freedom of expression, an end to judicial prosecution of journalists, and to restricting the internet and blogging.

* An independent judicial system that is not politicized.