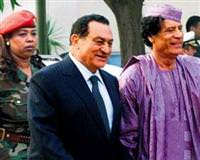 Protesters in Libya were planning to take to the streets for a "day of rage," on Thursday inspired by uprisings in Egypt and Tunisia, but rights groups warned of a possible crackdown by security forces.

In a country where public dissent is rare, plans for the protests were being circulated by anonymous activists on social networking sites such as Facebook and Twitter, and it was not clear if the demonstrations would materialise.

Libya has been tightly controlled for over 40 years by Muammar Gaddafi -- who is now Africa's longest-serving leader -- but the oil exporter has felt the ripples from the overthrow of long-standing leaders in its neighbours Egypt and Tunisia.

Though some Libyans complain about unemployment, inequality and limits on political freedoms, analysts say an Egypt-style revolt is unlikely because the government can use oil revenues to smooth over most social problems.

Witnesses and local media reported that several hundred people clashed with police and Gaddafi supporters on Tuesday night in the city of Benghazi, about 1,000 km (600 miles) east of the Libyan capital.

Late on Wednesday evening, it was impossible to contact witnesses in Benghazi because telephone connections to the city appeared to be out of order.

State media reported there were pro-Gaddafi protests too across the country, with people chanting "We sacrifice our blood and souls for you, our leader!" and "We are a generation built by Muammar and anyone who opposes it will be destroyed!"

People posting messages on opposition site www.libya-watanona.com, which is based outside Libya, urged Libyans to protest and drew parallels with the uprising this month that toppled Egyptian President Hosni Mubarak.

"From every square in our beloved country, people should all come together in one city and one square to make this regime and its supporters afraid, and force them to run away because they are cowards," said a post from someone called Mustafa.

A Facebook page dedicated to the planned protest urged followers to "make it a day of rage in Libya."

Gaddafi says Libya does not need to import Western concepts of democracy because it is run on his system -- known as the Third Universal Theory -- under which citizens govern themselves through grassroots institutions called popular committees.

Thursday is the anniversary of clashes on Feb. 17, 2006 in Benghazi when security forces killed several protesters who were attacking the city's Italian consulate.

Rights group Amnesty International voiced concern about a new crackdown. "The Libyan authorities must allow peaceful protests, not try to stifle them with heavy-handed repression," it said in a statement.

Libya accounts for about 2 percent of the world's crude exports. Companies including Shell, BP and Eni have invested billions of dollars in tapping its oil fields, home to the largest proven reserves in Africa.