Riot breaks out in Libyan city of Benghazi 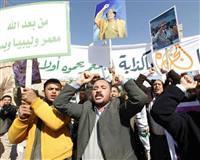 Hundreds of people clashed with police and government supporters overnight in the eastern Libyan city of Benghazi, a witness and local media said, in a rare show of unrest in the oil exporting country.

Libya has been tightly controlled by leader Muammar Gaddafi for over 40 years but has also felt the ripples from popular revolts in its neighbors Egypt and Tunisia.

Libyan state television said that rallies were held in the early hours of Wednesday morning across the country in support of Gaddafi, who is Africa's longest serving leader.

Reports from Benghazi, about 1,000 km (600 miles) east of the Libyan capital, indicated the city was now calm but that overnight, protesters armed with stones and petrol bombs had set fire to vehicles and fought with police.

The protesters were angry about the arrest of a human rights campaigner and demanded his release.

Gaddafi opponents used the Facebook social networking site to call on people to go out onto the streets across Libya on Thursday for what they described as a "day of rage."

Quryna newspaper, which is based in Benghazi, quoted Abdelkrim Gubaili, the director of a local hospital, as saying 38 people were injured in the clashes, most of them members of the security forces. He said they had all been discharged.

"Last night was a bad night," a Benghazi resident, who did not want to be identified, told Reuters by telephone.

"Now Benghazi is quiet. The banks are open and the students are going to school," the same witness said later.

Some Libyans complain about high unemployment, income inequality and limits on political freedoms, but analysts say an Egypt-style revolt is unlikely there because the government can use its vast energy revenues to placate unhappy citizens.

A video clip posted on the YouTube site by someone who said it was recorded in Benghazi on Tuesday night showed a crowd of people outside what looked like a government building chanting: "No God but God!" and "Corruption is the enemy of God."

People in Benghazi have a history of distrust of Gaddafi's rule. Many of his most ardent opponents living in exile, and many of the people jailed for membership of banned Islamist militant groups, are from the city.

According to the reports from Benghazi, the unrest was triggered by the arrest of Fethi Tarbel, a human rights activist who worked with families of people detained in Tripoli's notorious Abu Salim jail.

The prison, used to hold government opponents and Islamist militants, was the scene of violent clashes in June 1996 in which 1,000 inmates were shot dead.

On Tuesday night, a crowd of people in Benghazi who had relatives in the prison marched on local government offices to demand Tarbel's release, Quryna newspaper reported.

It said a local official agreed to free him, but the protesters marched anyway to the city's Shajara square where they clashed with police and government supporters.

The protesters later dispersed and the square was taken over by government supporters who rallied there until the early hours of the morning, Quryna reported.

Libyan state television showed footage of an early-morning rally in the Libyan capital of government supporters.

Participants chanted slogans accusing Qatar-based television news channel Al Jazeera -- which has given wide coverage to revolts that overthrew the leaders of Tunisia and Egypt -- of broadcasting lies.

Libya's state-run Jana news agency said there were also pro-Gaddafi rallies in other cities, including Benghazi.

It said people taking part held up portraits of Gaddafi and chanted: "We sacrifice our blood and souls for you our leader!" and "We are a generation built by Muammar and anyone who opposes it will be destroyed!"

In a possible reaction to the unrest in Benghazi, Libya will free 110 members of banned militant group the Libyan Islamic Fighting group from Abu Salim prison later on Wednesday, a human rights activist said.

Dozens of men accused of membership of the group have been freed since last year, when its leaders renounced violence.