Change in Egypt to ratchet pressure on Israel 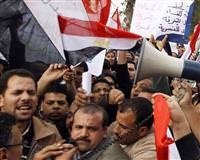 Egypt's revolution and upheavals across the region herald a shift in the balance of power between Israel and its neighbors, as Arabs push out autocrats who often put U.S. and European ties before their people's demands.

The Egyptian revolt that put an end to President Hosni Mubarak's 30-year rule, is still in its early days. No one can yet predict who will be holding Mubarak's place as leader of the Arab world's most populous country at the end of the year.

But few of the likely outcomes include an extension of Mubarak's policies toward Israel that involved cooperation in blockading Gaza, hostility to Hamas and Hezbollah, and muted criticism of Israel's treatment of the Palestinians.

Unless the Egyptian military clings to power or elements of the ancient regime make a miraculous comeback, ordinary Egyptians will have more say in their country's foreign policy than at any time in the 5,000 years Egypt has existed as a political entity.

Judging by opinion polls and the views of most of the main political forces, Egyptians will be more assertive than Mubarak in backing Palestinian rights and less willing to comply with requests from Israel and its allies in the United States.

No significant group, not even the Muslim Brotherhood, is calling for outright abrogation of the Israeli-Egyptian peace treaty, a pillar of Israel's regional security strategy since Egypt's late President Anwar Sadat signed the document in 1979.

But between abrogation and a continuation of Mubarak's policies, the next elected Egyptian government will have a range of options likely to put Israel on the defensive and bring to an end the cozy relationship the Jewish state enjoyed with Mubarak.

Coupled with a recent shift in the policy of Turkey, now more outspoken in challenging Israeli policies, the Egyptian revolution marks, as Israeli politicians say they fear, a break with the strategic dominance they felt they had established.

"For a long time, countries like Turkey and Egypt were ruled by men more interested in pleasing the United States than their own people, and as a result, they shielded Israel from their people's anger. Now more of that anger will find its way into the corridors of power."

A democratic transformation in Egypt, especially if it is replicated in other Arab states, would undermine one argument Israelis have made to win sympathy in Europe and the United States: that it is the sole Middle East democracy, an oasis of "Western values" surrounded by Arab despots ruling by force.

"What is at stake here is the pretence that Israel is a stable, civilized, western island in a rough sea of Islamic barbarism and Arab fanaticism," writes post-Zionist Israeli historian Ilan Pappe.

"The 'danger' for Israel is that the cartography would be the same but the geography would change. It would still be an island but of barbarism and fanaticism in a sea of newly formed egalitarian and democratic states," he writes.

Unlike their authoritarian predecessors, an Arab democracy would be able to criticize with credibility and a clear conscience Israel's conduct toward the Arabs it governs.