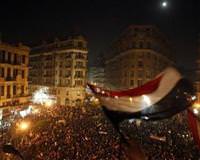 A court on Saturday approved a new political party that had sought a license for 15 years, making it the first to be recognized since Hosni Mubarak's overthrow and illustrating the political earthquake shaking the new Egypt.

In a move to placate reformists and strikers and distance itself from the Mubarak regime, the interim government will change up to four ministers in a limited cabinet reshuffle, an Egyptian official was quoted by state media as saying.

The Wasat Party (Center Party) had tried to gain an official license four times since 1996, but each time its application was rejected by a political parties committee chaired by a leading member of the ruling party, a procedure that stifled opposition.

"The court ruled that the party was established and legitimate as of today," Egypt's news agency said of Wasat, set up by a former member of the Muslim Brotherhood and which wants to fuse a respect for Islamic society with democracy.

The means that the Wasat Party can take part in elections that the military has promised to hold within six months and its founder Abou Elela Mady said that it had been powered by "the winds of freedom that blew with the revolution."

The Supreme Council of the Armed Forces, which took over in Egypt after the momentous downfall of Mubarak, 82, dissolved parliament and suspended the constitution to amend it ahead of the elections.

"The current unstable political conditions do not permit a new constitution," said the official quoted by state media, referring to turmoil in the Arab world's most populous nation that followed anti-Mubarak protests that started on January 25.

The amendments are expected to be completed in the coming days and will be submitted to a referendum, a judge on the committee dealing with the changes said.

Egypt's military this weekend warned workers using their new-found freedom to protest over pay that strikes must stop, in a move that businessmen said on Saturday could have come sooner.

Workers cite a series of grievances. What unites them is a new sense of being able to speak out in the post-Mubarak era.

Under pressure from activists to speed up the pace of reform by lifting emergency law and freeing political prisoners, the military had adopted a softly-softly approach since taking over but is now saying labor unrest threatens national security.

The state of emergency should be lifted within six months, the official told state media.

The military issued the order, effectively banning strikes and industrial action, after millions celebrated across Egypt with fireworks, dancing and music to mark a week since Mubarak stepped down after 30 years.

"Though this statement should have come way earlier, I think the army was just allowing people to take their chance to voice their demands and enjoy the spirit of freedom," said Walid Abdel-Sattar, a power industry executive, said on Saturday.

"It's Not The Time For It," said Saturday's banner headline in the state-owned Akhbar Elyom newspaper, urging the nation to end work stoppages which it said were paralyzing the economy and losing Egypt revenue.

Banks, which have been closed this week because of strikes that have disrupted business, are due to open on Sunday, the first day of the working week in Egypt. The military believes this is an important step toward restoring normality.

Life is far from normal in Egypt after the 18-day uprising, with schools closed, tanks on the streets in major cities and nationwide public sector strikes. The curfew which runs from midnight to 6 a.m. is to be lifted shortly.

In a sign of economic nervousness, Egypt's stock exchange, closed since January 27 because of the turmoil, said it would remain shut until it was sure banks were functioning properly.

The military council has yet to abolish the political parties law used by the Mubarak administration to control every aspect of political life.

Mady broke away from the Muslim Brotherhood in the mid-1990s because of what he said were its "narrow political horizons."

His first attempt at founding the Wasat Party landed him and others in a military court, accused of trying to set up a party as an Islamist front. Mady drew criticism from the Brotherhood, which said he was trying to split the movement.

The Brotherhood, which is regarded with suspicion by Washington, is the biggest political group in Egypt and says it would win 30 percent of votes in an election.

In an interview with Reuters this week, Mady likened his party's ideology to that of Turkey's ruling AK Party, which has roots in political Islam but appeals to a wider electorate, including the secular middle class and religious conservatives.