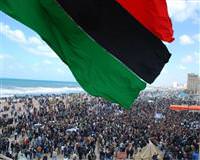 Thousands of Turkish workers awaiting evacuation from Libya took refuge in a soccer stadium in the eastern city of Benghazi from where they heard gunfire and explosions through the night, a witness said on Monday.

Thousands of Turkish workers awaiting evacuation from Libya took refuge in a soccer stadium in the eastern city of Benghazi from where they heard gunfire and explosions through the night, a witness said on Monday.

Violent unrest against Libyan leader Muammar Gaddafi has spread to the capital, Tripoli, where dozens of people were reported killed overnight. His son has vowed to fight until the "last man standing" after scores of protesters were killed in the east of the country.

Sertac Karan, an executive with Turkish firm Arsel Construction, told Reuters by telephone from the stadium near Benghazi airport: "After funeral prayers we can hear firefights and explosions.

"It's totally out of control, we see 15- and 16-year-olds carrying Kalashnikovs."

About 3,500 Turks were waiting for evacuation at the stadium, said Karan, who arrived three days earlier after the company's sites were ransacked.

Members of the security forces changed out of uniform and joined protests to avoid being attacked by protesters, he said.

Foreign Minister Ahmet Davutoglu told a news conference at the end of a visit to Tunisia that bloodshed should be avoided and order restored in Libya.

"We are resolved to bring our citizens back as soon as possible," he said. "Fortunately there has been no loss of (Turkish) lives until now."

Speaking in Ankara, Foreign Trade Minister Zafer Caglayan said looters had attacked Turkish companies, which have projects in Libya worth more than $15 billion, and officials estimated there were 25,000 Turks working there.

Turkish Prime Minister Tayyip Erdogan spoke by telephone to Gaddafi, according to the trade minister.

Hidir Yentur, a logistics manager with a construction company in Al Bayda, eastern Libya, said workers were forced to move to a safer place after their site was stormed by looters.

"A group attacked our construction site and took computers, but they didn't do anything to us. Our water is running low," Yentur told Reuters by telephone from Libya.

Davutoglu said about 550 people were airlifted from Tripoli on Sunday, but it became impossible to land at Benghazi.

Davutoglu said seven planes were ready to go there once the airport was usable. There were unconfirmed reports earlier that opposition protesters had taken control of the airport.

Two ferries that set sail with a naval escort from Istanbul were expected to reach Benghazi on Tuesday afternoon, Davutoglu said. They have capacity for about 1,200 passengers. A convoy of buses were taking more people out by road to Egypt.

A popular uprising in Tunisia last month inspired other Arab revolts, one of which toppled Egypt's president 10 days ago.

Davutoglu, current president of the Council of Europe, was in Tunisia to meet the interim government there.

Turkey's President Abdullah Gul pleaded for leaders of countries in the region to listen to their people.

"These matters should be handled without spilling a brother's blood and of course all leaders should take into account the will and wishes of their people," he said.

Libya was part of the Ottoman Empire from the 16th century until it was conquered by Italy in 1912.

Trade volume between the two countries amounted to about $2.4 billion last year.

Tekfen, running a $550 million project, suspended its operations in Libya and planned to evacuate all its 400 Turkish workers, said vice-chairman Umit Ozdemir.