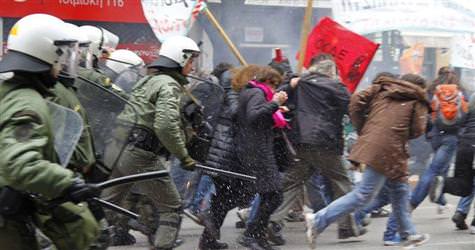 Greek police clashed with protesters on Wednesday as around 100,000 workers, pensioners and students marched to parliament to protest austerity policies aimed at helping Greece cope with a huge debt crisis.

In the biggest march since December 2008 riots brought the country to a standstill for weeks according to police sources and eyewitness, 100,000 Greeks marched through the streets of Athens chanting "We are not paying" and "No sacrifice for plutocracy". Police officialy put the figure at 32,000.

Fifteen policemen and 10 civilians were injured, including one journalist slightly hurt by a petrol bomb, police officials said, while 26 protesters were detained.

Protesters broke up marble paving stones for rocks to throw at police, set garbage cans on fire and damaged bus stops. Others unfolded a black banner reading "We are dying" in front of parliament.

"Enough is enough! All these tax hikes are killing our businesses and we have to fire people," said bar owner Costas Loras, 42.

Despite many strikes, the Socialist government cut pay and pensions and raised taxes last year in return for a 110 billion euro ($150 billion) bailout by the European Union and the International Monetary Fund that saved Greece from bankruptcy.

Greece's international lenders approved a new 15 billion euro tranche of the aid this month, but set a tougher target for privatisation proceeds and called for more structural reforms.

"This medicine is worse than the disease. It makes the rich richer and the poor poorer," said Yannis Panagopoulos, president of Greece's largest union GSEE. "We will continue fighting, we won't stop."

Markets are watching for any derailment of Greece's fiscal efforts. Analysts say strikes are unlikely to shake the government, which has a comfortable majority in parliament.

"People once again expressed their opposition to the austerity measures. But no matter how big these protests are they can't change the government's policies," said Costas Panagopoulos, head of ALCO pollsters.

Private sector union GSEE and its public sector sister ADEDY, which together represent about 2.5 million workers or half the Greek workforce, have vowed to resist austerity measures, saying they are killing the economy.