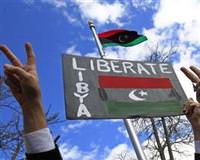 The United States imposed sanctions on the Libyan government on Friday and said the legitimacy of longtime Libyan leader Muammar Gaddafi had been "reduced to zero."

In response to Gaddafi's bloody crackdown on an uprising against his 41-year rule, President Barack Obama signed an executive order freezing the assets of Gaddafi, his family and top officials, as well as the Libyan government, the country's central bank and sovereign wealth funds.

"These sanctions therefore target the Gaddafi government, while protecting the assets that belong to the people of Libya," Obama said in a statement.

"By any measure, Muammar Gaddafi's government has violated international norms and common decency and must be held accountable," he added.

The U.S. Treasury said the action would block substantial sums of Libyan money and prevent it being looted by the Gaddafi government, but declined to offer a dollar value.

With the Libyan crisis also being taken up at the United Nations, European Union governments agreed on the idea of imposing an arms embargo, asset freezes and a travel ban on the oil-producing North African nation, with diplomats saying a formal decision would be taken early next week.

Washington announced the sanctions move -- along with the closing of its embassy and withdrawal of U.S. diplomats -- after a chartered ferry and a plane carrying Americans and other evacuees left Libya earlier on Friday.

The Obama administration had been criticized for its relatively restrained response so far to the turmoil. But U.S. officials said fears for the safety of the Americans had tempered Washington's response.

"(Gaddafi) is overseeing the brutal treatment of his people ... and his legitimacy has been reduced to zero in the eyes of his people," White House spokesman Jay Carney said after Libyan security forces shot protesters in the streets of Tripoli on Friday.

Obama discussed Washington's sanctions plan with the leaders of Britain, France and Italy on Thursday and Turkish Prime Minister Tayyip Erdogan on Friday.

Canadian Prime Minister Stephen Harper said on Friday his government was preparing sanctions against Libya and that "Canada fully supports the United Nations Security Council on a resolution that could include a weapons embargo, individual sanctions against key Libyan officials and an asset freeze."

CLINTON TO DRUM UP SUPPORT

The Obama administration said earlier this week it was studying a wide range of options, including the freezing of assets, a travel ban on members of Gaddafi's government, a "no-fly" zone over Libya and military action.

In a first step, the U.S. Treasury has told American banks to closely monitor transactions that may be related to unrest in Libya for possible signs that state assets were being misappropriated.

Several U.S. energy companies in Libya -- including Marathon, Hess and Occidental -- have continued working through the crisis as other foreign firms have curtailed or suspended operations.

"Although Libya is not a big supplier to the U.S., any sanctions imposed by the U.S. -- particularly on doing business with that country -- means the U.S. or other countries affected will still have to tap other suppliers," said Peter Beutel, president of trading consultants Cameron Hanover.

In New York, the U.N. Security Council was considering a French-British draft proposal for an arms embargo, financial sanctions and a request to the International Criminal Court to indict Libyan leaders for crimes against humanity.

The White House did not express direct support for the proposal but said it was discussing it with members of the Security Council, including the other four permanent members -- China, Russia, Britain and France.

Secretary of State Hillary Clinton will push for unity against Gaddafi on Monday at the U.N. Human Rights Council.

The United States resumed diplomatic ties with Libya in 2004 after Gaddafi agreed to abandon his pursuit of weapons of mass destruction.

U.S. economic sanctions were progressively removed after Libya agreed to accept civil responsibility for the bombing of Pan Am Flight 103 over Scotland in 1988.