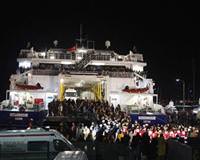 Foreign Affairs Minister Ahmet Davutoğlu announced that Turkey has officially evacuated all citizens that requested assistance and states; “We have evacuated 17,200 Turkish nationals from Libya.”

According to Davutoğlu, the majority of evacuations to ensure citizens' safety have been completed and now the focus will be directed towards providing humanitarian aid to Libya.
Davutoğlu made the announcement at Ankara's Esenboğa Airport on his way to Geneva and stated that they have requested a 'latest situation inventory' from the Turkish companies operating in Libya. '' At present, we have no nationals waiting for us at either the Trablus or Benghazi Airports. All of the people that requested to be evacuated have been safely returned home."
Evaluating the recent evacuations from Libya, Minister Davutoğlu expressed that their intention was not to evacuate all of the citizens of one nation from Libya, but was solely based on citizens whose safety was in question in order for them to be able to, "take some time off in their own country so they can be safe."Davutoğlu went on to state, "There are citizens there that feel safe and have not requested to be evacuated and they have remained in Libya for now."
Noting that they are about to embark on the next stage, Davutoğlu states, ''We exerted great efforts for the evacuations. And we have completed the part that was urgent. We will now move on to the second level, which involves getting humanitarian aid over there. We are considering using the ports and airports we used for evacuations to send food and other humanitarian aid to Libya.'