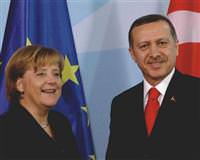 Erdogan, who is visiting Germany, on Sunday told some 10,000 members of the country's large Turkish community their children should learn Turkish before they learn German.

'You must integrate, but I am against assimilation ... no one may ignore the rights of minorities,' Erdogan told the gathering in the western city of Duesseldorf.

Speaking in Berlin on Monday, German Foreign Minister Guido Westerwelle the country's Turkish community needed their children to focus on German to optimise their chances of a good education and prospects later in life.

'Children growing up in Germany must learn German first,' he said.

Erdogan's visit comes in the wake of a heated debate over the place of foreigners in Germany, sparked last year after central banker Thilo Sarrazin published a bestselling book that argued German culture was at risk from Muslims.

Erdogan is likely to raise Turkey's bid to join the European Union at a meeting later on Monday with German Chancellor Angela Merkel.