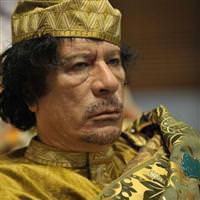 The United States moved warships and aircraft closer to Libya Monday and froze $30 billion in assets, ramping up pressure on what a top U.S. envoy called a "delusional" Muammar Gaddafi to relinquish power.

In the hardest-hitting U.S. denunciation yet of Libya's leader, U.S. ambassador to the United Nations Susan Rice said Gaddafi is "disconnected from reality," is "slaughtering his own people" and is unfit to lead.

The United States also pressed Gaddafi's inner circle to abandon their leader. "You have to think very, very seriously which side you want to be on. ... You will be held accountable," White House spokesman Jay Carney said.

The military preparations and tougher U.S. rhetoric follow days of criticism of President Barack Obama's administration by Republican lawmakers, conservative commentators and others for an initially cautious response to the turmoil in Libya.

The administration has defended its response, saying it had been reluctant to take any steps that could endanger U.S. citizens in the North African country. Washington imposed sanctions on Libya Friday just hours after a plane carrying some of the last Americans flew out of the capital Tripoli.

While its position on Gaddafi is now clear, the United States is still struggling to develop a coherent policy toward the various rebel groups. U.S. officials are in contact with them but have ruled out any immediate military aid.

One major problem is that while Libyan opposition groups have demonstrated they are capable of organizing themselves to confront Gaddafi, they are "not coalescing," a senior U.S. national security official told Reuters on condition of anonymity. The rebellion largely remains bereft of obvious leaders who the United States could deal with, he said.

In the meantime, U.S. authorities are putting the financial squeeze on Gaddafi to pressure him to go.

A U.S. Treasury Department official said about $30 billion in assets in the United States have been blocked from access by Gaddafi and his family. David Cohen, acting Treasury under secretary for terrorism and financial intelligence, said the sum was the largest ever blocked.

Gaddafi appeared to shrug off the stepped-up pressure in an interview with ABC's Christiane Amanpour, laughing when asked if he would step down and insisting that Libyans loved him.

Asked about Gaddafi's comments, Rice said: "It sounds just, frankly, delusional. And when he can laugh in talking to ... an international journalist while he is slaughtering his own people, it only underscores how unfit he is to lead and how disconnected he is from reality."

Foreign governments are increasing pressure on Gaddafi to leave in the hope of ending fighting in Libya that has claimed at least 1,000 lives and forced thousands of people to flee.

Colonel David Lapan, a Pentagon spokesman, said the U.S. military is moving ships closer to Libya "in case they are needed." Lapan also said the Pentagon is repositioning planes nearer to Libya.

The U.S. ships could be used for humanitarian and rescue missions, Secretary of State Hillary Clinton said in Geneva, where she told the U.N. Human Rights Council it was "time for Gaddafi to go -- now."

"There is not any pending military action involving U.S. naval vessels," Clinton said.

The Pentagon gave no details of the forces being moved but the United States has a major base near Naples, Italy, home to its Mediterranean headquarters, as well as in Rota, Spain.

As of Monday, the U.S. Navy had eight ships in the Sixth Fleet's area of operations, which includes the Mediterranean Sea and parts of the Atlantic Ocean usually patrolled by frigates and destroyers. It has two aircraft carriers further southeast in the Red Sea and the Arabian Sea.

A no-fly zone would stop Gaddafi from using warplanes or helicopters to attack rebels who have seized large parts of the country, although it is unclear how big a role the Libyan air force has played in the crisis so far.

The Obama administration has said military action is one option it is looking at, although many analysts say the United States is highly unlikely to launch a ground invasion or air strikes because of the volatile situation on the ground.

U.S. planes bombed Libya in 1986, killing more than 40 people including Gaddafi's adopted baby daughter, in response to a Berlin bombing blamed on Libya that killed three people in a Berlin disco used by U.S. servicemen.

Obama, in a call to Canadian Prime Minister Stephen Harper as part of an effort to forge international unity on Libya, agreed on the need to deter further violence by Gaddafi's government and also to weigh other options against it "should they become necessary," the White House said.