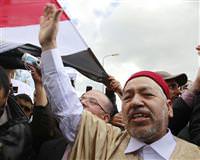 Tunisia's Islamist Ennahda movement, banned for two decades until this week, could now join the government as cabinet resignations threatened a shaky transition to democracy, its leader said on Wednesday.

Six ministers quit this week following deadly protests, leaving the caretaker government, which stepped in after long-time leader Zine al-Abidine Ben Ali was ousted on Jan 14, on the verge of collapse.

Tunisia on Tuesday permitted Ennahda, a moderate Islamist movement, to form a political party. Leader Rachid Ghannouchi, 69, returned to Tunisia on Jan. 30 after 22 years in exile.

Asked whether Ennahda would join an interim government, Ghannouchi said: "It's possible...When conditions that require our participation emerge, we will join. What's important is assuming a position that contributes to democratisation."

The party will then contest the parliamentary election in July on a platform of social and economic justice, Ghannouchi said. An aide, Saidi Ridha, told Reuters Ennahda will not field its own candidate in the subsequent presidential poll and will support a coalition figure.

Ghannouchi also told Reuters he would step down as Ennahda's leader later this year following a party congress.

Ennahda does not oppose the army stepping in during the current turmoil, the worst political crisis since Ben Ali's regime fell in a popular uprising, Ghannouchi said.

"We are not afraid of the military's intervention because Tunisia's army does not have experience running the country and is a small army," Ghannouchi said, speaking through a translator. "We welcome the Tunisian army because it stood up against the dictator's orders to shoot protesters."

Armed forces must halt a rise in violence, which Ghannouchi blamed on Ben Ali loyalists attempting to upset the transition.

The uprising in North Africa's most developed country set off mass protests across a region governed for decades by monarchs and presidents. Largely peaceful demonstrations toppled Egypt's president, while a revolt in Libya has turned bloody as Muammer Gaddafi clings to power after four decades as leader.

To prevent oil-producing Libya from slipping into chaos, Secretary of State Hillary Clinton has said the United States and its NATO allies are actively considering creating a no-fly zone to prevent Gaddafi from using aircraft to strafe rebels.

"We do not approve of any foreign intervention in the Islamic world, because it is never beneficial. The Iraq experience was terrible, we have Afghanistan too," Ghannouchi said, adding Washington is sometimes wrongly credited with influencing the region's revolts.

"The large-scale transformations, whether in Tunisia or Egypt, have been carried out by the will of the people in the face of powerful international forces," he said.

Ghannouchi dismissed concerns secular Tunisia will shift towards Iranian-style religious rule, saying its form of political Islam is pluralistic. The model instead is Turkey.

NATO's only Muslim member, Turkey is governmed by the Islamist-rooted AK Party but has a secular constitution and is seeking entry into the European Union. Its economy is worth about $700 billion.

"Turkey's experience is a serious inspiration for the Arab world, especially in how to reconcile Islam and modernity," Ghannouchi said. "Turkey serves as an example with its human rights, democracy, freedoms and economic development."