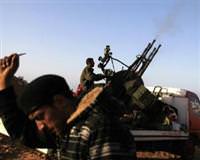 One of Muammar Gaddafi's sons, Saadi, said on Monday his father had not yet thrown his army into full battle against rebels, saving it to shield Libya against foreign attack, and civil war could erupt if he did.

In an interview with Al Arabiya television, Saadi Gaddafi also said the Libyan leader could not resign as demanded by the rebels because that could also lead to civil war.

Saadi blamed some of the unrest on one of his brothers, Saif al-Islam, who he said had sought economic reforms but failed to address the problems of ordinary Libyans.

"The tribes are all armed, there are forces from the Libyan army and the eastern region is armed. The situation is not like Tunisia or Egypt," said Saadi, who was briefly a professional footballer in Italy before turning to business.

Protests in Tunisia and Egypt have toppled the presidents of both countries since the start of the year.

"The situation is very dangerous," he said. The leader must play a very, very big role in calming Libya and convincing people to sit together. "If something happened to the leader, who would be in control? A civil war would start."

He said the Libyan army had so far only intervened to protect "sensitive sites" and a wider war would result if his father ordered them into an all-out fight.

"The leader has given special instructions to the army not to intervene, save for the protection of sensitive sites, and to be ready to repel foreign intervention."

The military was just waiting for Gaddafi's orders, Saadi said. "So far it has not moved. When it does, a civil war may erupt," he said in the full broadcast of the interview, which Al Arabiya had excerpted earlier in the day.

The news channel said that Saadi Gaddafi warned that Libya would turn into a new Somalia and that tribes would fight against each other.

He said Tripoli was holding a dialogue through the tribes to answer the demands of the people, without making clear which demands he was referring to.

"But there are armed groups that pursue the path of killing and violence, which I think leaves only the choice of confronting them," he added.

Saadi's criticism of his brother Saif al-Islam hinted at strains within the Gaddafi family as the unrest continued.

"The leader told them (Saif al-Islam and the ministers) on a daily basis that you are facilitating matters and the budget, but there are things they did not do."

The reforming efforts of Saif al-Islam were stymied by opposition from inside the ruling elite and, some analysts had said, family members. Educated at a British university, Saif al-Islam has acted a spokesman for his father during the unrest.

Saadi had a brief career in Italy's Serie A soccer league between 2003 and 2007, though he had little time on the field.

Saadi, who qualified as an engineer and also holds military rank, later turned to business. He told Reuters in an interview last year he was behind a project to set up a free trade zone on the Mediterranean coast west of Tripoli.

When violence engulfed Libya's eastern city of Benghazi in mid-February, Saadi spoke on local radio to say he had been appointed commandant of the city. Soon after, residents took control of Benghazi and forced out Gaddafi's forces.