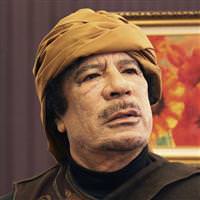 Libya's central bank governor has surfaced to confirm he has been in Istanbul, but did not reveal whether he remained loyal to Muammar Gaddafi or was siding with the opposition, the Financial Times reported.

The Libyan government said on Tuesday that Finance Minister Abdulhafid Zlitni had taken over temporarily as head of the central bank because Governor Farhat Omar Bengdara was abroad. Bengdara's whereabouts had been unclear for the past two weeks.

The FT's website said Bengdara, whom it described as "the man who holds the keys to the Gaddafi regime's finances", had contacted the paper by email late on Tuesday to say that he had been informed of the move and that he had been in Turkey.

But he insisted that he was doing his job and was abroad because it was easier to conduct business there than in Tripoli, the FT said.

He said he would resign after the current crisis, adding that he had been working over the past two weeks to explain the central bank's position and clarify the effect of the international effort to freeze Libyan assets, the FT said.

Unicredit said a week ago that it had restored contact after a week with Bengdara, who is vice chairman of Italy's top bank in which the Libyan central bank has a stake of nearly 5 percent.

The FT said international bankers and opposition figures have been scrambling to locate Bengdara and decipher his loyalties because they assume he is one of the few officials with the authority to move funds.

The paper said Bengdara's family comes from Benghazi, the eastern city at the centre of the rebellion against Gaddafi, but added that opposition figures abroad considered him too closely tied to the regime.