EU leaders' comments ahead of summit on Libya 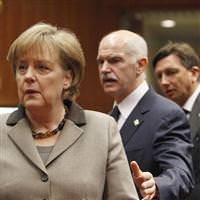 European Union leaders were meeting in Brussels on Friday to discuss the situation in Libya and other countries in North Africa.

Following are some comments made before the start of talks:

"It must be totally clear that somebody who wages war against his own people is no partner for talks with the European Union. Therefore we demand (Libyan leader Muammar) Gaddafi's immediate resignation. We will do everything to send a united signal, economic and financial sanctions will show that.

"We want to do everything to contain the suffering of the Libyan people, but we must think carefully about the steps we take so that they lead to a reasonable outcome. I hope that we send a united signal today, that 'divide and conquer' would only play into Gaddafi's hands. This must be avoided."

"France asks Europe to reaffirm its common desire for (Libyan leader Muammar) Gaddafi to go and to recognise the Libyan authorities under the Libyan National Council."

"France is not in favour of military intervention or an intervention by NATO, because Arab revolutions belong to the Arabs..."

"Finally, France wants two things: the opening of humanitarian zones in North Africa to take care of the terrible issue of displaced people... and with David Cameron, the French and the English have said that we are open, if the United Nations wants it, and if the Arab League accepts it, and if the Libyan authorities that we want to be recognised asks for it, to have targeted defensive operations in the sole eventuality that Gaddafi would use chemical weapons or use his warplanes to target non-violent demonstrators."

"We are very clear that the first issue is to stop the violence and that he (Libyan leader Muammar Gaddafi) should understand that he needs to leave power. For me every discussion about military intervention is more for the U.N. Security Council, for the Arab League, for NATO, to discuss and is not a responsibility for the European Union.

"I think we need to address questions about how we engage in dialogue, in humanitarian aid and in being ready to support institutions to a functioning democracy as we are discussing now also concerning Egypt and Tunisia."

"This is an important European Council. I think it's important that the countries of Europe show political will, show ambition, and show unity in being clear that Colonel Gaddafi must go, that his regime is illegitimate, that what it is doing to his people is completely unacceptable.

"But at the same time I think it is the moment for Europe to understand that we should show real ambition about recognising that what is happening in North Africa is a real democratic awakening, and we should be encouraging these countries down a democratic path.

"And it's a moment for Europe to say: 'What we've done in the past hasn't always worked'.

"Now we should be reaching out to these countries, offering them a new partnership, opening up our markets and welcoming their approach of greater democracy, greater freedom, greater human rights.

"This is potentially a good moment for our world, and we should grab it, and seize it, and try and shape it."

"Greece is at the epicentre of the decisions we are going to be making today -- first of all on the financial euro zone crisis, and secondly of course on North Africa -- and on both fronts Greece is doing its best.

"On the North African situation, Greece has been very active in the humanitarian efforts to evacuate many nationals -- tens of thousands of nationals, actually -- from Libya to their homes, and even today we had successful cooperation with the Dutch to help the Dutch extricate three of their members of the armed forces and bring them back home to Holland."

"We will continue our efforts, but it is very important that today the European Union makes decisions -- historical decisions, I would say -- both on the financial sector issues, the euro zone issues, and of course on North Africa and on Libya."

ON POSSIBILITY OF NO-FLY ZONE OVER LIBYA:

"Well, it is an option, but obviously it's something you always have to consider in conjunction with NATO and the United Nations."

"We are very glad that our three soldiers have been released. Sixteen million Dutch are looking forward to welcome them back home. I am grateful for the good offices of Greece and Malta that helped secure their release."

"(Libyan leader Muammar) Gaddafi has to know that the international community broadly expects him to step down. The Europeans would do well if they talk about the measures they want to decide on in the meeting and not the day before."