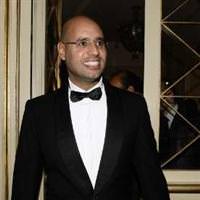 Below are key quotes from the interview:

RELATIONS WITH THE WEST

"The French, the Europeans, they should talk to the Libyan people. ... If they want to support the militia, do it. But I tell you: you are going to lose. We will win. And we are not afraid of the American fleet, NATO, France, Europe. This is our country. We are here, we will die here."

"I still believe that President Obama is a wise man and he will (make) the right decision."

"Time is out now. It's time for action. ... We gave them (rebels) two weeks (for negotiations).

WHAT WILL HAPPEN IN LIBYA NOW?

"In a few days ... you will see a surprise, you will see people in the east ... defeating the militia. ... They don't represent anybody. They are self-appointed people. ... It's a joke, it's a Mickey Mouse council. Nobody is with them."

"But the West still lives in this fantasy. You will see a big surprise. Nobody welcomes NATO, the Americans to occupy Libya. ... Now it's too late for them. We are so united, we are so strong. And Libya will be free and peaceful soon."

"The army is very patient. They gave them (rebels) two weeks ... trying to reach a peaceful end. Two weeks. Even with terrorists, they were still patient."

ON DEMOCRACY AND REFORM

"The target is the constitution so everything is legalized. My father said in public, that I don't want to be the president of all of the country. We want to have a new structure, a new system, new parliament, new government, we have a draft ready. We want to have a modern democracy."

"Today we are going to hand over the Dutch soldiers to the Maltese and Greeks. We told them, don't come back again without our permission. We captured the first NATO soldiers, we are sending them back home. But we are still keeping their helicopter."

IS LIBYA IN A STATE OF CIVIL WAR?

"To be very precise, to be very frank, the war now is between the whole Libyan nation against terrorists and armed militia. Even the people in the east, we are receiving thousands of calls, people are saying, come here, hurry up and liberate us from armed militia."

"People are so afraid. They cannot open shops, kids can't go to school, universities shut down, people cannot go and get their money and salaries ... Everything is frozen now. Why? Because of the armed militia ... It's chaos, it's a mess ... They are waiting for us to get rid of the militia."

IS YOUR FATHER ANGRY?

WHO ARE THE REBELS?

"They are just gangsters. They took the arms of the army and they are fighting everybody."