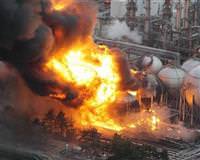 Japan warned of a meltdown on Saturday at a nuclear reactor damaged when a massive earthquake and tsunami struck the northeast coast, but said the risk of radiation contamination was small.

Media reports estimate at least 1,300 people may have been killed by the biggest earthquake ever recorded in Japan and then a 10-meter tsunami that swept inland.

Experts said any threat of widespread radiation leaks would be contained as long as the reactor's outer container is intact.

State broadcaster NHK quoted officials as saying there was no need to extend an evacuation area already set up around the damaged plant.

Authorities have been scrambling to reduce pressure at two nuclear power plants in Fukushima, 240 km (150 miles) north of Tokyo, damaged by the quake, which measured a massive 8.9, the biggest since records began in Japan 140 years ago.

Jiji news agency quoted nuclear authorities as saying that there was a high possibility that nuclear fuel rods at Tokyo Electric Power's (Tepco's) Daiichi No.1 reactor may be melting or have melted.

Experts said if that is the case, it means the reactor is heating up. If that is not halted, such as by venting steam which releases small amounts of radiation, there is a chance it would result in a rupture of the reactor pressure vessel.

But the risk of contamination can be minimized as long as the external container structure is intact, they said. The worry then becomes whether the quake has weakened the structure.

There has been no official word so far on whether the structure was damaged in the quake.

Japanese officials and experts have been at pains to say that while there would be radiation leaks, they would be very small and have dismissed suggestions of a repeat of a Chernobyl-type disaster.

"No Chernobyl is possible at a light water reactor. Loss of coolant means a temperature rise, but it also will stop the reaction," Naoto Sekimura, a professor at the University of Tokyo, said.

"Even in the worst-case scenario, that would mean some radioactive leakage and equipment damage, but not an explosion. If venting is done carefully, there will be little leakage. Certainly not beyond the 3 km radius."

The tremor was so huge that thousands fled their homes from coastlines around the Pacific Rim, as far away as North and South America, fearful of a tsunami.

Most appeared to have been spared anything more serious than some high waves, unlike Japan's northeast coastline which was hammered by the huge tsunami that turned houses and ships into floating debris as it surged into cities and villages, sweeping aside everything in its path.

"I thought I was going to die," said Wataru Fujimura, a 38-year-old sales representative in Koriyama, Fukushima, north of Tokyo and close to area worst hit by the quake.

"Our furniture and shelves had all fallen over and there were cracks in the apartment building, so we spent the whole night in the car... Now we're back home trying to clean

The unfolding natural disaster, which has been followed by dozens of aftershocks, prompted offers of search and rescue help from 50 countries.

In one of the worst-hit residential areas, people buried under rubble could be heard calling out for rescue, Kyodo news agency reported. TV footage showed staff at one hospital waving banners with the words "FOOD" and "HELP" from a rooftop.

In Tokyo, tens of thousands of office workers were stranded overnight after the quake shut down public transport. Many were forced to bed down where they could, with newspapers to lie on and briefcases for pillows.

Kyodo said at least 116,000 people in Tokyo had been unable to return home on Friday evening due to transport disruption.

The northeastern Japanese city of Kesennuma, with a population of 74,000, was hit by widespread fires and one-third of the city was under water.

City mayor Shigeo Sugawara said: "A huge number of houses have been washed away." He said fuel storage tanks had been destroyed, sending oil flowing out which then caught fire.

The airport in coastal city Sendai, home to one million people, was on fire, Japanese media said.

"Sendai (city) is now completely sunk underwater," said limousine driver Yoshikatsu Takayabe, 52. "What do I want the government to do? I can't flush the toilet, I want the water back on in my house."

TV footage from Friday showed a black torrent of water carrying cars and wrecked homes at high speed across farmland near Sendai, 300 km (180 miles) northeast of Tokyo. Ships had been flung onto a harbor wharf, where they lay helplessly.

Kyodo news agency reported that contact had been lost with four trains in the coastal area.

The disaster poses a huge challenge for Kan's government which has come under such concerted attack from the opposition and within the ruling Democratic Party (DJP) that it has struggled to implement any policy.

Just hours before the quake struck, Kan was rejecting demands that he resign, his political future looking increasingly bleak and unable even to muster enough support to ensure the passage of bills needed to enact the new budget.

But after the tremor, politicians pushed for an emergency budget to fund relief efforts, with Kan urging them to "save the country," Kyodo reported.

Japan is already the most heavily indebted major economy in the world, meaning any additional borrowing by the government would be closely scrutinized by financial markets.

The quake, the most powerful since Japan started keeping records 140 years ago, sparked at least 80 fires in cities and towns along the coast, Kyodo said.

Other nuclear power plants and oil refineries were shut down and one refinery was ablaze. Power to millions of homes and businesses was knocked out. Several airports, including Tokyo's Narita, were closed on Friday and rail services halted. All ports were shut.

The central bank said it would cut short a two-day policy review scheduled for next week to one day on Monday and promised to do its utmost to ensure financial market stability.

The disaster struck as the world's third-largest economy had been showing signs of reviving from an economic contraction in the final quarter of last year. It raised the prospect of major disruptions for many key businesses and a massive repair bill running into tens of billions of dollars.

The earthquake was the fifth most powerful to hit the world in the past century. It surpassed the Great Kanto quake of September 1, 1923, which had a magnitude of 7.9 and killed more than 140,000 people in the Tokyo area.

The 1995 Kobe quake caused $100 billion in damage and was the most expensive natural disaster in history.