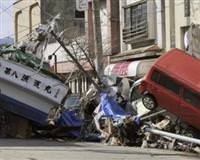 Radiation leaked from a damaged Japanese nuclear reactor north of Tokyo on Saturday, the government said, after an explosion blew the roof off the facility in the wake of a massive earthquake.

The developments raised fears of a meltdown at the plant as officials scrambled to contain what could be the worst nuclear disaster since the Chernobyl explosion in 1986 that shocked the world.

The Japanese plant was damaged by Friday's 8.9-magnitude earthquake, which sent a 10-meter (33-foot) tsunami ripping through towns and cities across the northeast coast. Japanese media estimate that at least 1,300 people were killed.

"We are looking into the cause and the situation and we'll make that public when we have further information," Chief Cabinet Secretary Yukio Edano said after confirming the explosion and radiation leak at the plant.

Edano said an evacuation radius of 10 km (6 miles) from the stricken 40-year-old Daiichi 1 reactor plant in Fukushima prefecture was adequate, but an hour later the boundary was extended to 20 km (13 miles). TV footage showed vapor rising from the plant, 240 km (150 miles) north of Tokyo.

Along Japan's northeast coast, rescue workers searched through the rubble of destroyed buildings, cars and boats, looking for survivors in hardest-hit areas such as the city of Sendai, 300 km (180 miles) northeast of Tokyo.

"All the shops are closed, this is one of the few still open. I came to buy and stock up on diapers, drinking water and food," Kunio Iwatsuki, 68, told Reuters in Mito city, where residents queued outside a damaged supermarket for supplies.

Across the coastline, survivors clambered over nearly impassable roads. In Iwanuma, not far from Sendai, people spelled S.O.S. out on the roof of a hospital surrounded by water, one of many desperate scenes.

The earthquake and tsunami, and now the radiation leak, present Japan's government with its biggest challenge in a generation.

The explosion at Chernobyl's nuclear plant's fourth reactor in 1986 sent thousands of tons of toxic nuclear dust billowing across the Ukraine, Russia and Belarus. It was the worst civil nuclear disaster.

The blast at the Japanese nuclear facility came as plant operator Tokyo Electric Power Co (TEPCO) worked desperately to reduce pressures in the core of the reactor.

The company has had a rocky past in an industry plagued by scandal. In 2002, the president of the country's largest power utility was forced to resign along with four other senior executives, taking responsibility for suspected falsification of nuclear plant safety records.

NHK television and Jiji news agency said the outer structure of the reactor building that houses the reactor appeared to have blown off, but nuclear experts said this did not necessarily mean the nuclear reactor had been breached.

Earlier the operator released what it said was a tiny amount of radioactive steam to reduce the pressure and the danger was minimal because tens of thousands of people had already been evacuated from the vicinity.

Reuters journalists were in Fukushima prefecture, about 70 km (40 miles) from the plant. Other media have reported police roadblocks in the area to prevent people getting closer.

Friday's tremor was so huge that thousands fled their homes from coastlines around the Pacific Rim, as far away as North and South America, fearful of a tsunami.

Most appeared to have been spared anything more serious than some high waves, unlike Japan's northeast coastline which was hammered by the huge tsunami that turned houses and ships into floating debris as it surged into cities and villages, sweeping aside everything in its path.

"I thought I was going to die," said Wataru Fujimura, a 38-year-old sales representative in Koriyama, Fukushima, north of Tokyo and close to the area worst hit by the quake.

"Our furniture and shelves had all fallen over and there were cracks in the apartment building, so we spent the whole night in the car ... Now we're back home trying to clean."

In one of the worst-hit residential areas, people buried under rubble could be heard calling out for rescue, Kyodo news agency reported earlier.

The international community started to send disaster relief teams on Saturday to help Japan, with the United Nations sending a group to help coordinate work.

The disaster struck as the world's third-largest economy had been showing signs of reviving from an economic contraction in the final quarter of last year. It raised the prospect of major disruptions for many key businesses and a massive repair bill running into tens of billions of dollars.

Toyota Motor Corp, the world's largest carmaker, said it would suspend operations at all of its 12 factories in Japan on Monday to confirm the safety of its employees.

Italy's National Institute of Geophysics and Volcanology said the earth's axis shifted 25 cm as a result of the earthquake, and the U.S. Geological Survey said the main island of Japan had shifted 2.4 meters.

The earthquake was the fifth most powerful to hit the world in the past century. It surpassed the Great Kant quake of September 1, 1923, which had a magnitude of 7.9 and killed more than 140,000 people in the Tokyo area.

The 1995 Kobe quake caused $100 billion in damage and was the most expensive natural disaster in history.